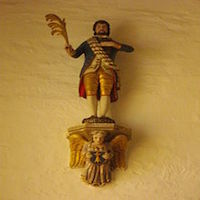 Son of the pagan King Clito of Ireland. When Saint Patrick arrived at Clito’s court, the king was hostile; Gwinear recognized Patrick‘s sincerity and piety, treated him well, and meditated on his message. Convert to Christianity. Hermit. Upon his father‘s death, he returned home, gathered 770 other converts, and worked to spread the faith in Wales and Brittany. Miracle worker. Martyr. The Cornish village of Gwinear is named for him. At Pluvigner there is a stained glass window of Gwinear hunting a stag with a cross between its antlers, and there is a holy well with his name near the church.