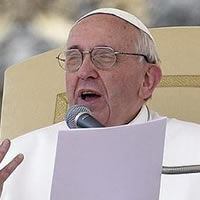 (ZENIT, Vatican City, July 5, 2016).- Here is the message published by the Pontifical Council for the Pastoral Care for Migrants and Itinerant People for “Sea Sunday”, which will be celebrated on July 10, 2016.

Seated comfortably on the sofa in our living room, we find it difficult to understand how much our daily life is depending on the maritime industry and the sea. If we look around in the places where we live and work, we realize that most of the furniture and IT equipment we are using have been transported by ships, our clothes were shipped in containers from the other side of the world and the fruits we eat were delivered by refrigerated ships from another country while tankers are transporting oil and petrol for our cars. Without seaborne trade the import and export of goods and finished products would not be possible.

Even when we decide to enjoy and relax by going in a cruise we do not think that thousands of seafarers are working hard to make sure that everything will run smoothly and we will have a comfortable vacation.

Furthermore in the recent humanitarian emergency in the Mediterranean Sea the crews of merchant vessels have been in the front line to intervene and rescuing thousands of people trying to sail to Europe on board of overcrowded and unseaworthy vessels, inflatable rafts.

Almost 1.200.000 seafarers of every nationality (many of them from developing countries) on board of 50,000 merchant ships are transporting almost 90% of every kind of cargo. The unforgiving forces of the open sea and of the oceans expose ships to significant risk, and the seafarers are “risking their life” more than one way.

The physical life of the seafarers is at risk because aside from the hazards of the forces of the nature, piracy and armed robbery, shifting from one area to another and constantly evolving and adapting to new situations, continue to be a major threat to the security of the crew. Their psychological well-being is at risk when after having been at sea for days or weeks they are denied shore leave and prevented to leave the vessel.

The family life of the seafarers is in danger because their contracts force them to stay away from their families and loved ones for many months and often for several years on a row. Children are growing up without a fatherly figure while all the family’s responsibilities are on the shoulders of the mother.

The human and working dignity of the seafarers is at risk when they are exploited with long working hours and their wages are delayed for months or in cases of abandonments not paid at all. Criminalization of seafarers is a serious concern especially considering that in recent years a number of previously considered lawful seafaring activities have been criminalized particularly in relation to incidents such as shipwrecks, pollution, etc.

Encouraged by Pope Francis who called the chaplains and volunteers of the Apostleship of the Sea to “be the voice of those workers who live far from their loved ones and face dangerous and difficult situations” , as Apostleship of the Sea we stand at the side of seafarers to reiterate that their human and labor rights must be respected and protected.

We would like also to call on Governments and competent maritime authorities to strengthening the implementation of the ILO Maritime Labor Convention (MLC) 2006, especially the Regulation 4.4 whose purpose is:  To ensure that seafarers working on board a ship have access to shore-based facilities and services to secure their health and well-being.

Finally, on this occasion of the annual celebration of Sea Sunday we would like to remind to all Christian communities and to each individual how important and essential are the seafarer profession and the shipping industry for our daily life. We would like to call on the bishops, especially the ones of maritime Dioceses to establish and support the Maritime Apostolate as  “a visible sign of your affectionate attention to those who cannot receive ordinary pastoral care.”

While expressing our gratitude to the seafarers for their work, we entrust them and their families to the maternal protection of Mary, Stella Maris.