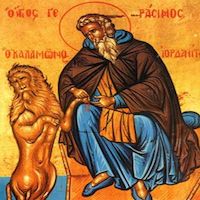 Gerasimus of the Jordan (Greek: Γεράσιμοςἐν Ιορδάν, Abba Gerasimus, Holy Righteous Father Gerasimus of Jordan—also spelled Gerasimos or Gerasim) -a Christian saint, monk and abbot of the 5th century AD. Born in the province of Lycia, the southern part of Asia Minor into a wealthy family.

Gerasimus left his family wealth and worldly affairs to become a monk. He departed for the region Thebaid in the Egyptian desert, later again returning to his native Lycia. About the middle of 5th century Saint Gerasimus went to Palestine and settled in wilderness near the Jordan River. There he established a monastery and became known for his righteous life of asceticism and prayer.

The story of Gerasimus and the lion, when the saint tamed the animal by removing a thorn from its paw and taught it obedience, became widely known in the Christian world. He is reputed to have attended to the Fourth Ecumenical Council at Chalcedon in 451.

Saint Gerasimus of the Jordan died in 475 (or, by other accounts 451). His feast day is celebrated on March 4 by the Eastern Orthodox Church and on March 5 by the Roman Catholic Church.

The Greek Orthodox monastery of Deir Hajla near Jericho commemorates St. Gerasimus, whose lavra was nearby. The history of the monastery is also linked to another Christian narrative. The Holy Family were said to have found refuge in a cave here during their flight from Herod the Great. An underground chapel was built on the spot where the Holy Family is believed to have spent the night.