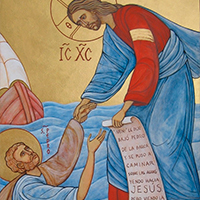 1) Opening Prayer
Father,
you call your children
to walk in the light of Christ.
Free us from darkness
and keep us in the radiance of your truth.
We ask this through our Lord Jesus Christ, your Son,
who lives and reigns with you and the Holy Spirit,
one God, for ever and ever. Amen.

2) Gospel Reading - Matthew 9,1-8
Jesus got back in the boat, crossed the water and came to his home town. And suddenly some people brought him a paralytic stretched out on a bed. Seeing their faith, Jesus said to the paralytic, 'Take comfort, my child, your sins are forgiven.'
And now some scribes said to themselves, 'This man is being blasphemous.' Knowing what was in their minds Jesus said, 'Why do you have such wicked thoughts in your hearts? Now, which of these is easier: to say, "Your sins are forgiven," or to say, "Get up and walk"? But to prove to you that the Son of man has authority on earth to forgive sins,' -- then he said to the paralytic-'get up, pick up your bed and go off home.'
And the man got up and went home. A feeling of awe came over the crowd when they saw this, and they praised God for having given such authority to human beings.

3) Reflection
• The extraordinary authority of Jesus. To the reader, Jesus appears as a person invested with extraordinary authority, by means of the words and actions (Mt 9, 6.8). The authoritative word of Jesus strikes evil at its root: in the case of the paralytic man on sin that affects the man in his liberty and blocks him in his living forces: “Your sins are forgiven” (v. 5); “”Get up pick up your bed and go off home” (v.6). Truly all the forms of paralysis of the heart and the mind to which we are subject are cancelled by the authority of Jesus (9, 6), because during his life on earth he met all these forms. The authoritative and effective word of Jesus awakens the paralyzed humanity (9, 5-7) and gives it the gift of walking (9, 6) in a renewed faith
• The encounter with the paralytic. After the storm and a visit in the country of the Gadarenes, Jesus returns to Capernaum, his city. And as he was on his way, he met the paralytic. The healing did not take place in a house, but along the road. Therefore, along the road that leads to Capernaum they brought him a paralytic man. Jesus addresses him calling him “my son”, a gesture of attention that soon becomes a gesture of salvation: “your sins are forgiven you” (v. 2) The forgiveness of sins which Jesus pronounces on the part of God on the paralytic refers to the bond between sickness, failure and sin. This is the first time that the evangelist attributes this particular divine power to Jesus, in an explicit way. For the Jews the sickness of a man was considered a punishment because of sins committed; The physical illness was considered always as a consequence of one’s own moral evil or due to parents (Jn 9, 2). Jesus restores to man the condition of salvation freeing him from illness as well as from sin.
• For some of those who were present, for the Scribes, the words of Jesus which announce forgiveness of sins is a true and proper blasphemy. According to them Jesus is arrogant because God alone can forgive sins. They do not manifest openly such a judgment of Jesus but express it by murmuring among themselves. Jesus who penetrates their hearts sees their considerations
and reproves them because of their unbelief. The expression of Jesus “To prove to you that the Son of man has authority on earth to forgive sins...” (v. 6) he is going to indicate that not only God can forgive sins, but with Jesus, also man (Gnilka).
• The crowd, differently from the Scribes, is seized by fear before the cure of the paralytic and glorifies God. The crowd is struck by the power to forgive sins manifested in the healing. People exult because God has granted such a power to the Son of man. Is it possible to attribute this to the ecclesial community where forgiveness of sins was granted on the order of Jesus? Matthew has presented this episode on forgiveness of sins with the intention of applying it to fraternal relationships within the ecclesial community. In it the practice to forgive sins, by delegation of Jesus, was already in force; a practice which was not shared in the Synagogue. The theme of forgiveness of sins is repeated also in Mt 18 and at the end of the Gospel it is affirmed that this is rooted in the death of Jesus on the Cross (26, 28). But in our context the forgiveness of sins is linked with the demand of mercy present in the episode which follows, the vocation of Matthew: «…mercy is what pleases me, not sacrifice. And indeed, I came to call not the upright but sinners” (Mt 9, 13). Such words of Jesus intend to say that He has made visible the forgiveness of God; above all, in his relationships with the Publicans or tax collectors and sinners, in sitting at table with them.
• This account that takes up again the problem of sin and reminds of the bond with the misery of man is something to be practiced in the forgiveness which should be given, but it is a story that should occupy a privileged place in the preaching of our ecclesial communities.

4) Personal Questions
• Are you convinced that Jesus, called the friend of sinners, does not despise your weaknesses and your resistance, but he understands and offers you the necessary help to live a life in harmony with God and with the brothers and sisters?
• When you make the experience of betraying or refusing friendship with God do you have recourse to the Sacrament of reconciliation that reconciles you with the Father and with the Church and makes you a new creature by the force of the Holy Spirit?

5) Concluding Prayer
The precepts of Yahweh are honest,
joy for the heart;
the commandment of Yahweh is pure,
light for the eyes. (Ps 19,8)