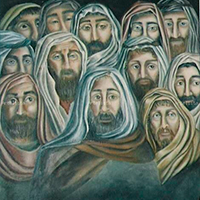 The difficult process of forming the disciples.
How to be born again.
Luke 9:51-62

1. Opening Prayer
Lord Jesus, send your Spirit to help us to read the Scriptures with the same mind that you read them to the disciples on the way to Emmaus. In the light of the Word, written in the Bible, you helped them to discover the presence of God in the disturbing events of your sentence and death. Thus, the cross that seemed to be the end of all hope became for them the source of life and of resurrection.
Create in us silence so that we may listen to your voice in Creation and in the Scriptures, in events and in people, above all in the poor and suffering. May your word guide us so that we too, like the two disciples from Emmaus, may experience the force of your resurrection and witness to others that you are alive in our midst as source of fraternity, justice and peace. We ask this of you, Jesus, son of Mary, who revealed to us the Father and sent us your Spirit. Amen.

2. Gospel Reading
a) A key to the reading: The literary context
In the context of Luke’s Gospel, the text for this Sunday is at the beginning of the new phase of Jesus’ activity. The frequent conflicts with the people and the religious authorities (Lk 4:28; 5:21.30; 6:2.7; 7:19.23.33-34.39) confirmed Jesus as being the Servant Messiah as foreseen in Isaiah (Is 50: 4-9; 53:12) and as assumed by Jesus himself from the beginning of his apostolic activities (Lk 4:18). From now on, Jesus begins to proclaim his passion and death (Lk 9:22.43-44) and decides to go the Jerusalem (Lk 9:51). This change in the course of events created a crisis among the disciples (Mk 8:31-33). They cannot understand and are afraid (Lk 9:45), because they still hold on to the old way of thinking of a glorious Messiah. Luke describes various episodes touching on the old mentality of the disciples: the desire to be the greatest (Lk 9:46-48); the will to control the use of the name of Jesus (Lk 9:49-50); the violent reaction of James and John at the refusal of the Samaritans to welcome Jesus (Lk 9:51-55). Luke also points out how hard Jesus tries to get his disciples to understand the new concept concerning his mission. This Sunday’s text (Lk 9: 51-62) gives some examples of the way Jesus tried to form his disciples.
b) A division of the text to help with the reading:
Luke 9:51-52: Jesus decides to go to Jerusalem
Luke 9:52b53: A village in Samaria does not welcome him
Luke 9:54: The reaction of John and James at the Samaritans’ refusal
Luke 9:55-56: Jesus’ reaction to the violence of James and John
Luke 9:57-58: Jesus’ first condition for following him
Luke 9:59-60: Jesus’ second condition for following him
Luke 9:61-62: Jesus’ third condition for following him
c) The text:
51 When the days drew near for him to be received up, he set his face to go to Jerusalem. 52 And he sent messengers ahead of him, who went and entered a village of the Samaritans, to make ready for him; 53 but the people would not receive him, because his face was set toward Jerusalem. 54 And when his disciples James and John saw it, they said, "Lord, do you want us to bid fire come down from heaven and consume them?" 55 But he turned and rebuked them. 56 And they went on to another village.
57 As they were going along the road, a man said to him, "I will follow you wherever you go." 58 And Jesus said to him, "Foxes have holes, and birds of the air have nests; but the Son of man has nowhere to lay his head." 59 To another he said, "Follow me." But he said, "Lord, let me first go and bury my father." 60 But he said to him, "Leave the dead to bury their own dead; but as for you, go and proclaim the kingdom of God." 61 Another said, "I will follow you, Lord; but let me first say farewell to those at my home." 62 Jesus said to him, "No one who puts his hand to the plough and looks back is fit for the kingdom of God."

3. A moment of prayerful silence
so that the Word of God may penetrate and enlighten our life.
4. Some questions
to help us in our personal reflection.
a) Which part of the text pleased you most and which touched you most?
b) What defects and limitations of the disciples can we discover in the text?
c) What teaching method does Jesus use to correct these defects?
d) What facts from the Old Testament are recalled in this text?
e) With which of these three vocations (vv. 57-62) do you identify yourself? Why?
f) Which of the defects of Jesus’ disciples is most prevalent in us, his disciples of today?

6. Psalm 19 (18), 8-14
The law of God source of formation
The precepts of the Lord are right,
rejoicing the heart; the commandment of the Lord is pure,
enlightening the eyes;
the fear of the Lord is clean, enduring for ever;
the ordinances of the Lord are true,
and righteous altogether.
More to be desired are they than gold,
even much fine gold;
sweeter also than honey and drippings of the honeycomb.
Moreover by them is thy servant warned;
in keeping them there is great reward.
But who can discern his errors?
Clear thou me from hidden faults.
Keep back thy servant also from presumptuous sins;
let them not have dominion over me!
Then I shall be blameless,
and innocent of great transgression.
Let the words of my mouth and the meditation of my heart
be acceptable in thy sight, O Lord,
my rock and my redeemer.

7. Final Prayer
Lord Jesus, we thank for the word that has enabled us to understand better the will of the Father. May your Spirit enlighten our actions and grant us the strength to practice that which your Word has revealed to us. May we, like Mary, your mother, not only listen to but also practise the Word. You who live and reign with the Father in the unity of the Holy Spirit forever and ever. Amen.