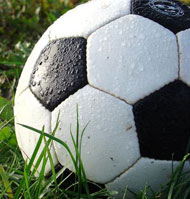 Pope Francis said this today in the Vatican when he received representatives of Italy’s Serie A soccer league and players from its Juventus and AC Milan teams, just one day before they’ll compete in the final of the Italian Cup at Rome’s Olympic Stadium.

In his address, Francis encouraged the players to always focus on that which is “truly good and beautiful,” and to never be afraid to show their fans “the moral and religious principles” on which they base their lives.

The Pontiff reminded the players that they are not just athletes, but, first of all, human beings, which requires listening to one’s conscience, and showing respect, understanding, and forgiveness.

As role models for many fans, especially the young who wish to imitate them, players’ behavior should always reflect “the authentic values of sport,” the Argentine Pope said.

Human and moral virtues, such as harmony, loyalty, and friendship, the Pope said, contribute to the success of a team.

When teams witnessing moral values, Francis stressed, that any ways in which sport has been darkened by negative episodes can be overcome and its real purpose can be understood.

Pope Francis concluded, thanking them again for their visit, asking them to pray for him, and imparting on them and their families God’s blessing.