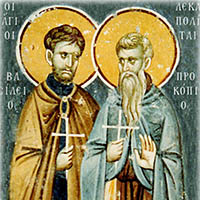 Roman Martyrology: At Constantinople, Saints Basil and Procopius of the Decapolis, monks, who at the time of the emperor Leo Isaurius III, fought strenuously for the veneration of the sacred Icons.

Opposed the 8th-century iconoclast decrees of Leo the Isaurian, and preserved icons and images in his care. Beaten and imprisoned for this work, he was finally released after Leo’s death.

The monks Basil and Procopius have brief, separate notices in the Synaxary of Constantinople. These present them as resisters to iconoclasm who were physically abused and imprisoned together under an iconoclast emperor and who were released only after his death.  Basil's notice calls the emperor "Leo the Iconoclast".  Whereas for a long time it was widely assumed that the worthy in question was Leo III (717-741), recent scholarship prefers Leo V (813-820).  These saints' reassignment to the period of Second rather than First Iconoclasm has led to their identification with correspondents of St. Theodore the Stoudite: B. as the hegumen to whom Fatouros is addressed and Procopius as his homonym.