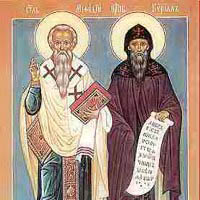 Roman Martyrology: At Alexandria in Egypt, the commemoration of the holy martyrs Julian and Eunus. Because he was so crippled by the gout that he could neither stand nor walk about, Julian was brought to the judge by two servants, who carried him in a chair. One of these denied the faith, but the other, called Eunus, was steadfast in confessing Christ with his master. These two were therefore sentenced to be placed on camels and paraded around the whole city and then, in the sight of the people, to be flogged to death, under the emperor Decius.

Summoned by authorities to answer a charge of Christianity in the persecutions of Decius, Julian was too crippled with gout to walk there. He was carried to court by two Christian servants, one of whom apostacized; the other was Saint Cronion Eunus. Martyred with Saint Cronion and Saint Besas of Alexandria. Their story is recorded by Saint Dionysius of Alexandria.

While Julian was servant of and martyred with Saint Julian the Alexandria in the persecutions of Decius.