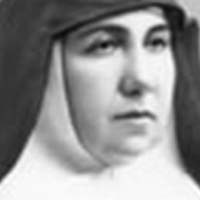 Roman Martyrology: In Spain, the birthday of Blessed Ascension of the Heart of Jesus Nicol Goñi, foundress of the Missionary Dominican Sisters of the Most Holy Rosary for the evangelization of the native peoples of the Amazon. She gave herself completely to working for the expansion of the Reign of Christ.

Born on March 14, 1868 in Tafalla, Navarre, Spain as Florentina Nicol Goni. Youngest of four children. Educated in the Saint Rose of Lima Dominican boarding school at Huesca, Spain where she became a Dominican nun in 1885, taking the name Ascensión. Teacher in 1886. In 1913 the Spanish state took over the school expelled the sisters. Missionary to Peru, arriving with eight others on 30 December 1913, teaching girls and caring for the poor and sick. Co-founded the Dominican Missionaries of the Rosary on 5 October 1918, and served the rest of her life as its first superior. Today the congregation has 785 missionaries in 21 nations.

Died on February 24, 1940 in Pamplona, Navarre, Spain of natural causes.