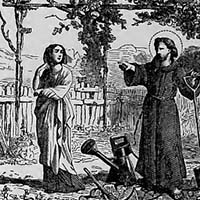 Roman Martyrology: At Sirmium in Hungary, Saint Sirénus or Sinérus, a martyr. He was a gardener, denounced by a certain woman, whom he had reproved for wantonness. Vindicated by the judge, he confessed himself a Christian, and when he would not sacrifice to the gods, he died by decapitation.

Serenus abandoned his home and people to live as a hermit in Sirmiun, Pannonia (modern Hungary) where he directed his thought to prayer, his labour to working a garden of fruit and herbs.

One day he found a woman and her daughters walking in the garden around noon. He recommended they withdraw, and return in the cool of the evening, but the way he said it led her to believe he was simply chasing them out. The woman‘s husband was an imperial guard, and he convinced Emperor Maximian to avenge this imagined insult. Serenus was arrested and brought to trial, but simply repeated what he had said, and was immediately acquitted. However, his demeanor led the judge to suspect that Serenus was a Christian, which was illegal. When questioned about it, Serenus admitted his faith. He was ordered to sacrifice to pagan gods; he refused, and was sentenced to death.

His story was very popular in times past due to his being a simple man brought to ruin not through any fault of his own, but as a result of the arrogance of the ruling class, a theme which has resonated in many an age, and because many writers and preachers liked to use the metaphor of the garden as an example of a proper Christian life.

He was  beheaded  February 23, 303 at Sirmiun, Pannonia (modern Hungary). Patron of bachelors and gardeners.