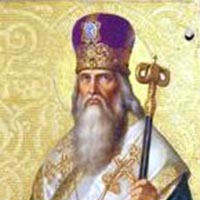 Roman Martyrology: At Constantinople, Saint Tarasius, a bishop, famous for his learning and holiness, who opened the Second Council of Nicea, in which the Fathers vindicated the veneration of the sacred Icons.

Born to the Byzantine nobility. Consul and then Secretary of State to Emperor Constantine IV and Empress Irene. Though a courtier in the most political of empires, he led the life of a monk. Unanimously chosen Patriarch of Constantinople; Tarasius said that he could not accept such a trust when his see was cut off from full commuion with Rome, which had happened under his predecessor. He convoked a Council on August 1,  786 to settle the dispute of the use of holy images, but Iconoclasts rioted, and the Council was reconvened in 787 in Nicea; the Council determined that the Church was in favour of images, and the Pope approved. Tarasius lived an ascetic life, eating simply and little, sleeping little, reading, praying, working for the Church. When the emperor put away his wife and got a priest to “marry” him to a servant, Tarasius condemned the action and was briefly imprisoned for his defiance.

Died February 25, 806 of natural causes. His relics preserved in the church of San Zaccaria, Venice, Italy