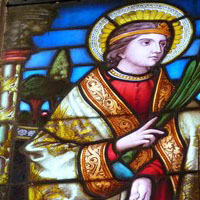 Daughter of a pagan named Africanus who promised the girl to a young noble named Evilase. Juliana put him off, first insisting that he become prefect of Nicomedia. When he became prefect, she insisted he become a Christian before they could marry, a condition he would never meet. Her father, who hated Christians himself, abused Juliana fearfully to get her to change her mind, but she held fast; ancients manuscripts describing these horrors put them in terms of her fighting a dragon, and she is often depicted that way in art. Evilase called her before the tribunal during the persecutions of Maximianus, denounced her as a Christian, and she was martyred. Hers was a favourite story, for telling and creation of stained glass and other art objects, during the Middle Ages.

She is known to be patron of sick people.