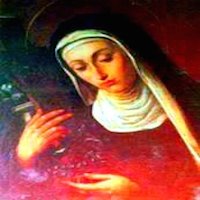 Daughter of a Paduan nun who had been seduced into ignoring her vow of chastity; Lucrezia grew up in the convent. She felt a call to the religious life, which many of the sisters of opposed due to the scandal of her birth. The bishop approved of her vocation, however, and she entered her novitiate as a Benedictine nun in 1461, taking the name Eustochium.

For four years she suffered from violent, hysterical fits. She was considered to be possessed, imprisoned, fed on bread and water, periodically starved and repeatedly exorcised. When her abbess fell ill, she was accused of poisoning the woman, and had to be saved from a mob of townspeople who wanted to burn her as a demon. Between these bouts, she was gentle, pious, patient and humble, apparently seeing it all as a form of penance. Her confessor and spiritual director insisted that she be allowed to continue with her vocation, and her sanctity won over many of the sisters who had opposed her.

She died very soon after her formal vows. The name of Jesus was found cauterized on her breast. She is venerated in Padua.