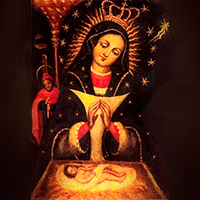 A portrait of the Virgin Mary in a Nativity scene. It is 13 inches (33 centimeters) wide by 18 inches (45 centimeters) high, and is painted on cloth. It is a primitive work of the Spanish school, painted c.1500. The Spanish brothers Alfonso and Antonio Trejo, two of the first European settlers on Santo Domingo, brought the portrait to the island some time prior to 1502, and eventually donated it to the parish church at Higuey. It's first shrine was finished in 1572, and in 1971 it was moved to its present Basilica. The image was crowned on 15 August 1922 during the pontificate of Pius XI. Due to its age, centuries of handling by the faithful, and exposure to candle smoke, it was in sad shape, and was restored in 1978. On 25 January 1979 by Pope John Paul II crowned the image with a gold and silver tiara, his gift to the Virgin. It's frame is made of gold, enamel and precious stones, and was constructed by an unknown 18th century artisan.

The Dominicans see the image as exemplifying Our Lady watching over the island and the growth of Christianity there. The feast day is marked by services, all-night vigils, singing, dancing, and festivals in many of the towns.

Legend says that the pious daughter of a rich merchant asked her father to bring her a portrait of Our Lady of Altagracia from Santo Domingo, but no one had heard of that title. The merchant, staying overnight at a friend's house in Higuey, described his problem as they sat outdoors after dinner. An old man with a long beard, who just happened to be passing by, pulled a rolled up painting from his bindle, gave it to the merchant, and said, "This is what you are looking for." It was the Virgin of Altagracia. They gave the old man a place to stay for the night, but by dawn he was gone, not to be seen again. The merchant placed the image on their mantle, but it repeatedly disappeared only to be found outside, and the family finally returned it to the church.