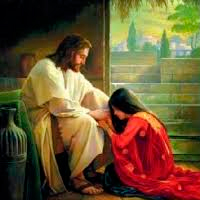 A Pharisee invited Jesus to dine with him, and he entered the Pharisee's house and reclined at table. Now there was a sinful woman in the city who learned that he was at table in the house of the Pharisee. Bringing an alabaster flask of ointment, she stood behind him at his feet weeping and began to bathe his feet with her tears. Then she wiped them with her hair, kissed them, and anointed them with the ointment. When the Pharisee who had invited him saw this he said to himself, "If this man were a prophet, he would know who and what sort of woman this is who is touching him, that she is a sinner." Jesus said to him in reply, "Simon, I have something to say to you." "Tell me, teacher," he said. "Two people were in debt to a certain creditor; one owed five hundred days' wages and the other owed fifty. Since they were unable to repay the debt, he forgave it for both. Which of them will love him more?" Simon said in reply, "The one, I suppose, whose larger debt was forgiven." He said to him, "You have judged rightly." Then he turned to the woman and said to Simon, "Do you see this woman? When I entered your house, you did not give me water for my feet, but she has bathed them with her tears and wiped them with her hair. You did not give me a kiss, but she has not ceased kissing my feet since the time I entered. You did not anoint my head with oil, but she anointed my feet with ointment. So I tell you, her many sins have been forgiven; hence, she has shown great love. But the one to whom little is forgiven, loves little." He said to her, "Your sins are forgiven." The others at table said to themselves, "Who is this who even forgives sins?" But he said to the woman, "Your faith has saved you; go in peace." Afterward he journeyed from one town and village to another, preaching and proclaiming the good news of the kingdom of God. Accompanying him were the Twelve and some women who had been cured of evil spirits and infirmities, Mary, called Magdalene, from whom seven demons had gone out, Joanna, the wife of Herod's steward Chuza, Susanna, and many others who provided for them out of their resources.

Introductory Prayer: Lord, I believe in you. I believe that you love me, that you are close by my side, and that you will be walking with me throughout this day. I trust in you, Lord. I trust you more than I trust myself, because you are infinitely good and all powerful. I love you, Jesus. I love you because you died on the cross for me, to save me.

Petition: Lord, bring me to a true conversion of heart.

1. Tears of Love and Sorrow: How could the woman who was a sinner — and such a sinner — dare to enter the house of Simon the Pharisee when it was filled with distinguished guests? Two things moved her: She trusted Jesus, and she was overwhelmed by the guilt of her sins. She already knew Jesus, how he preached, how he had treated other sinners, others who were suffering inner anguish like she was. All her years of guilt, self-accusation, and near despair are released in a flood of silent tears that bathe Christ’s feet — tears of love and trusting sorrow. In an exquisitely feminine gesture, she wipes Christ’s feet with her hair and pours out all of her most precious ointment upon them. What heart could fail to be moved by the scene? What heart has not experienced Christ’s silent acceptance of its own poor tears of repentance, wrenched from a conscience laden down by sin?

2. “If This Man Were a Prophet”: Simon the Pharisee considers himself righteous before God and men. So the woman’s display causes him to doubt Jesus’ identity: “If this man were a prophet….” True righteousness, says St. Gregory the Great, is compassionate; whereas false righteousness is indignant. Simon feels no need for forgiveness. “The one thing which shuts a man off from God is self-sufficiency…. The better a man is, the more he feels his sin…. It is true to say that the greatest of sins is to be conscious of no sin; but a sense of need will open the door to the forgiveness of God, because God is love, and love’s greatest glory is to be needed” (The Gospel of Luke, William Barclay, p. 95). Besides the sinful woman, Jesus also seeks to win Simon to himself. And so he begins a gentle rebuke of Simon for his lack of hospitality, to try to make him aware that he, too, is in need of God’s forgiveness.

3. “Your Sins Are Forgiven”: After planting the seeds that he hopes will give rise to love, Jesus turns back to the woman. He pronounces those words which no one else can say, words that free her from her crushing burden, words that bring peace to her soul and an end to her tears, words that change her life forever, making her an ardent disciple of the Lord: “Your sins are forgiven.” A few other words follow, just as gentle, just as encouraging, just as able to change a life: “Your faith has saved you; go in peace.” With what newfound dignity the woman slowly rises to her feet, faces the stunned and still hostile guests, and silently takes her leave of that company! Have our hearts and consciences been penetrated in the same way by those words of Christ we hear each time we receive the sacrament of reconciliation: “I absolve you from your sins”? Have our lives changed like hers did?

Conversation with Christ: Thank you, Lord, for your goodness of heart, for your insatiable zeal to reach every soul and win them over to you. Thank you for allowing me to express my love and sorrow to you in this meditation.

Resolution: I will strive to bring someone I know into contact with Christ’s mercy.