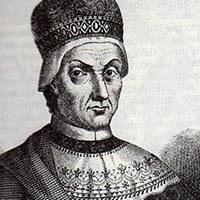 Roman martyrology: In the monastery of Cusani, the birthday of St. Peter Orseolo (Urseolus), confessor, previously Doge of Venice, and afterwards monk of the Order of St. Benedict, renowned for piety and miracles.

Born in 928 at Rivo alto, Province of Udine, Venice, Italy to a wealthy, noble, and prominent family. Married at age 18 to Felicitas, and the father of one son, Peter, who became the Doge of Venice in 991. Admiral and commander of the Venetian fleet by age 20. Rid the Adriatic Sea of pirates.

Chosen Doge of Venice on 12 August 976, the day after a revolt, the murder of his predecessor, and a fire that destroyed much of the city. Built hospitals and orphanages, started reconstruction of the Cathedral of Saint Mark, and began social programs to help widows, orphans, pilgrims, and the abandoned.
He poured much of his own fortune into the effort, and within two years Peter had restored law and order, and rebuilt much of the city. Rightly considered one of Venice‘s greatest rulers.

In the night of 1 September 978, believing his duty to the world fulfilled, and possibly feeling crushed by it all, Peter secretly left Venice for the Benedictine monastery of Saint-Michel-de-Cuxa in the Pyrenees on the border of France and Spain, not even telling his family of his plans. Benedictine monk. While the move was sudden, it was apparently something he’d been considering for over a decade. When his wife learned of his move, she approved; they’d lived chastely since the birth of their son, and she knew of his spiritual yearnings. Spiritual student of Saint Romuald at Saint-Michel-de-Cuxa at whose suggestion he built a hermitage, and retired even further from the world, spending the rest of his life in solitude and prayer.
As a monk, he excelled in humility, devotion to prayer, charity, and self-denial. Thereafter, Peter’s zeal for even greater perfection prompted him to obtain permission to live in solitude a short distance from the monastery.

Died on January 10, 987 at Saint-Michel-de-Cuxa Abbey, Pyrenees mountains, France of natural causes his tomb became a site for pilgrimages and miracles.