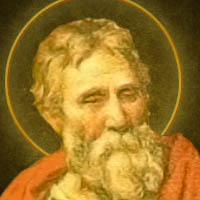 Roman martyrology: At Rome, Pope St. Agatho, who terminated a life remarkable for sanctity and learning by a holy death.

Agatho, a Sicilian by birth, was remarkable for his charity and benevolence, a profound humility, and an engaging sweetness of temper.

He was a married layman and successful businessman for most of his life. In maturity he finally followed a call to God, and with his wife’s blessing, he became a monk at Saint Hermes’ monastery in Palermo, Sicily. Having been several years treasurer of the Church of Rome, he succeeded Domnus in the pontificate in 679.

He presided by his three legates in the sixth general council and third of Constantinople, in 680, in the reign of the pious emperor Constantine Pogonatus, against the Monothelite heresy, which he confuted in a learned letter to that emperor, by the tradition of the apostolic church of Rome: “acknowledged,” says he, “by the whole Catholic church, to be the mother and mistress of all other churches, and to derive her superior authority from Saint Peter, the prince of the apostles, to whom Christ committed his whole flock, with a promise that his faith should never fail.

The Sixth Ecumenical Council (680-681) accepted Agatho's definitions of the two wills of Christ, although the pope did not attend the council. Agatho died during a plague in 681.

As pontiff, Agatho brought his business skills to the throne, maintaining the accounting records himself. He worked to resolve a dispute between Saint Wilfrid of York and Saint Theodore of Canterbury concerning diocesan boundaries in England; this was the first known occasion of English bishops appealing to Rome for a decision. He condemned the Monothelite heresy, and wrote definitive texts concerning the nature of Christ’s will; his writings and authority swayed the Council of Constantinople, and reunited Constantinople with Rome, though he died before the good news reached him.