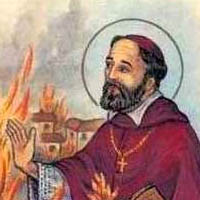 Roman martyrology: In the city of Ancona, Piceno (Italy today), Saint Marcellinus, bishop, accordingly to what Pope St. Gregory the Great wrote, by the grace of God delivered the city from a fire

Etymology: Roman praenomen which was probably derived from the name of the Roman god MARS.

Born in Ancona, Italy to the nobility. Bishop of Ancona,  and one of its holy protectors.  He was also a member of the sanctoral fire brigade, a distinguished group that includes, among others, St. Agatha, St. Cuthbert, St. Florian of Lorch, St. Remigius of Reims, and St. Richardis.

According to pope St. Gregory the Great, when a fire had broken out in Ancona and could not be put out, by ordinary means bishop Marcellinus, who suffered from gout, instructed that he be brought in his litter to a point next to the flames and be set down there; this was done and right away the fire recoiled from him and ceased its advance, thus sparing the remaining buildings.  That story, widely read in the Middle Ages, is the source of all subsequent knowledge about Marcellinus.

Died on c.566 of natural causes and his remains are believed to be those of Marcellinus were brought in the eleventh century from Ancona's palaeochristian cathedral of St. Stephen into its new one dedicated to St. Lawrence that later, in the thirteenth or fourteenth century, came to be known as that of St. Cyriac. They still repose in the crypt of that since much damaged and then rebuilt structure.