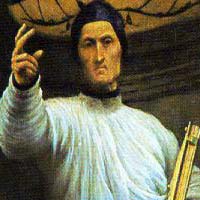 Born on September 1st, 1381 at Venice, Italy to the Venetian nobility; his ancestors had fled Constantinople for political reasons. Had the gift of prophecy and of miracle worker.

Lawrence’s pious mother sowed the seeds of a devout religious life in the boy’s youth. In 1400 when he was about nineteen years old, he entered the monastery of the Canons Regular of Saint Augustine on the Island of Alga near Venice. In spite of his youth he excited admiration by his poverty, mortifications, and fervor in prayer. At that time the convent was changed into a congregation of secular canons living in community. After his ordination in 1406 Lawrence was chosen prior of the community, and shortly after that general of the congregation. He gave them their constitution, and was so zealous in spreading the same that he was looked upon as the founder.

His reputation for saintliness as well as his zeal for souls attracted the notice of Eugene IV and on 12 May, 1433, he was raised to the Bishopric of Castello. The new prelate restored churches, established new parishes in Venice, aided the foundation of convents, and reformed the life of the canons. But above all he was noted for his Christian charity and his unbounded liberality. All the money he could raise he bestowed upon the poor, while he himself led a life of simplicity and poverty. He was greatly respected both in Italy and elsewhere by the dignitaries of both Church and State. He tried to foster the religious life by his sermons as well as by his writings.

He died on January 8, 1455 at Venice, Italy of natural causes and was interred at the basilica of San Pietro di Castello, Venice.

His beatification was ratified by Clement VII in 1524, and he was canonized in 1690 by Alexander VIII. Innocent XII appointed 5 September for the celebration of his feast. The saint’s ascetical writings have often been published, first in Brescia in 1506, later in Paris in 1524, and in Basle in 1560, etc. We are indebted to his nephew, Bernardo Giustiniani, for his biography.