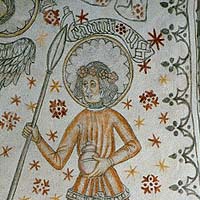 Roman martyrology: Danish noble; Roskilde.  Supported the efforts of St. Vicelin and defended his area against Viking raids. He was killed by his cousin who saw him as a rival to the Danish throne.

Born in c.1096 at Roskilde, Denmark. Second son of King Erick the Good of Denmark,
He was baptized Gregory and raised in the court of Saxony. The surname "Lavard" is equivalent to the English "Lord." As a youth he was at the court of Saxony with the future Emperor Lothair III. His uncle, King Niels (Nicholas), named him duke of Schleswig c. 1115. Spent years defending against Viking raids. Supported the missionary work of Saint Vicelin. Father of King Valdemar I, who worked for Canute's canonization.

Through the protection of Lothair, whom he tried to evangelize, he became, c. 1129, prince (Knés) of the Wends in eastern Holstein. Put forward as eventual successor to King Niels, he constituted a rival to the latter's son, Magnus, opposed Canute coming to the throne, and arranged his murder.