Catechism
Part one: The Profession of Faith
IV. The Spirit of Christ in the Fullness of Time
"Rejoice, you who are full of grace". John and the Holy Spirit. 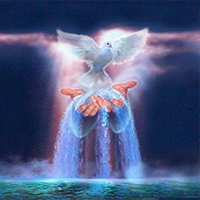 IV. The Spirit of Christ in the Fullness of Time

717 "There was a man sent from God, whose name was John."89 John was "filled with the Holy Spirit even from his mother's womb"90 by Christ himself, whom the Virgin Mary had just conceived by the Holy Spirit. Mary's visitation to Elizabeth thus became a visit from God to his people.91

718 John is "Elijah (who) must come."92 The fire of the Spirit dwells in him and makes him the forerunner of the coming Lord. In John, the precursor, the Holy Spirit completes the work of "[making] ready a people prepared for the Lord."93

719 John the Baptist is "more than a prophet."94 In him, the Holy Spirit concludes his speaking through the prophets. John completes the cycle of prophets begun by Elijah.95 He proclaims the imminence of the consolation of Israel; he is the "voice" of the Consoler who is coming.96 As the Spirit of truth will also do, John "came to bear witness to the light."97 In John's sight, the Spirit thus brings to completion the careful search of the prophets and fulfills the longing of the angels.98 "He on whom you see the Spirit descend and remain, this is he who baptizes with the Holy Spirit. and I have seen and have borne witness that this is the Son of God.... Behold, the Lamb of God."99

720 Finally, with John the Baptist, the Holy Spirit begins the restoration to man of "the divine likeness," prefiguring what he would achieve with and in Christ. John's baptism was for repentance; baptism in water and the Spirit will be a new birth.100

"Rejoice, you who are full of grace"

721 Mary, the all-holy ever-virgin Mother of God, is the masterwork of the mission of the Son and the Spirit in the fullness of time. For the first time in the plan of salvation and because his Spirit had prepared her, the Father found the dwelling place where his Son and his Spirit could dwell among men. In this sense the Church's Tradition has often read the most beautiful texts on wisdom in relation to Mary.101 Mary is acclaimed and represented in the liturgy as the "Seat of Wisdom."
In her, the "wonders of God" that the Spirit was to fulfill in Christ and the Church began to be manifested:

722 The Holy Spirit prepared Mary by his grace. It was fitting that the mother of him in whom "the whole fullness of deity dwells bodily"102 should herself be "full of grace." She was, by sheer grace, conceived without sin as the most humble of creatures, the most capable of welcoming the inexpressible gift of the Almighty. It was quite correct for the angel Gabriel to greet her as the "Daughter of Zion": "Rejoice."103 It is the thanksgiving of the whole People of God, and thus of the Church, which Mary in her canticle104 lifts up to the Father in the Holy Spirit while carrying within her the eternal Son.

723 In Mary, the Holy Spirit fulfills the plan of the Father's loving goodness. With and through the Holy Spirit, the Virgin conceives and gives birth to the Son of God. By the Holy Spirit's power and her faith, her virginity became uniquely fruitful.105

725 Finally, through Mary, the Holy Spirit begins to bring men, the objects of God's merciful love,107 into communion with Christ. and the humble are always the first to accept him: shepherds, magi, Simeon and Anna, the bride and groom at Cana, and the first disciples.

726 At the end of this mission of the Spirit, Mary became the Woman, the new Eve ("mother of the living"), the mother of the "whole Christ."108 As such, she was present with the Twelve, who "with one accord devoted themselves to prayer,"109 at the dawn of the "end time" which the Spirit was to inaugurate on the morning of Pentecost with the manifestation of the Church.

728 Jesus does not reveal the Holy Spirit fully, until he himself has been glorified through his Death and Resurrection. Nevertheless, little by little he alludes to him even in his teaching of the multitudes, as when he reveals that his own flesh will be food for the life of the world.110 He also alludes to the Spirit in speaking to Nicodemus,111 to the Samaritan woman,112 and to those who take part in the feast of Tabernacles.113 To his disciples he speaks openly of the Spirit in connection with prayer114 and with the witness they will have to bear.115

729 Only when the hour has arrived for his glorification does Jesus promise the coming of the Holy Spirit, since his Death and Resurrection will fulfill the promise made to the fathers.116 The Spirit of truth, the other Paraclete, will be given by the Father in answer to Jesus' prayer; he will be sent by the Father in Jesus' name; and Jesus will send him from the Father's side, since he comes from the Father. the Holy Spirit will come and we shall know him; he will be with us for ever; he will remain with us. the Spirit will teach us everything, remind us of all that Christ said to us and bear witness to him. the Holy Spirit will lead us into all truth and will glorify Christ. He will prove the world wrong about sin, righteousness, and judgment.

730 At last Jesus' hour arrives:117 he commends his spirit into the Father's hands118 at the very moment when by his death he conquers death, so that, "raised from the dead by the glory of the Father,"119 he might immediately give the Holy Spirit by "breathing" on his disciples.120 From this hour onward, the mission of Christ and the Spirit becomes the mission of the Church: "As the Father has sent me, even so I send you."121