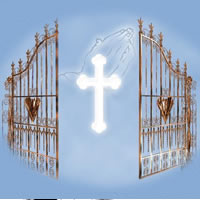 325 The Apostles' Creed professes that God is "creator of heaven and earth". the Nicene Creed makes it explicit that this profession includes "all that is, seen and unseen".

326 The Scriptural expression "heaven and earth" means all that exists, creation in its entirety. It also indicates the bond, deep within creation, that both unites heaven and earth and distinguishes the one from the other: "the earth" is the world of men, while "heaven" or "the heavens" can designate both the firmament and God's own "place" - "our Father in heaven" and consequently the "heaven" too which is eschatological glory. Finally, "heaven" refers to the saints and the "place" of the spiritual creatures, the angels, who surround God.186

327 The profession of faith of the Fourth Lateran Council (1215) affirms that God "from the beginning of time made at once (simul) out of nothing both orders of creatures, the spiritual and the corporeal, that is, the angelic and the earthly, and then (deinde) the human creature, who as it were shares in both orders, being composed of spirit and body."187

The existence of angels - a truth of faith

328 The existence of the spiritual, non-corporeal beings that Sacred Scripture usually calls "angels" is a truth of faith. the witness of Scripture is as clear as the unanimity of Tradition.

330 As purely spiritual creatures angels have intelligence and will: they are personal and immortal creatures, surpassing in perfection all visible creatures, as the splendour of their glory bears witness.190

Christ "with all his angels"

331 Christ is the centre of the angelic world. They are his angels: "When the Son of man comes in his glory, and all the angels with him. . "191 They belong to him because they were created through and for him: "for in him all things were created in heaven and on earth, visible and invisible, whether thrones or dominions or principalities or authorities - all things were created through him and for him."192 They belong to him still more because he has made them messengers of his saving plan: "Are they not all ministering spirits sent forth to serve, for the sake of those who are to obtain salvation?"193

332 Angels have been present since creation and throughout the history of salvation, announcing this salvation from afar or near and serving the accomplishment of the divine plan: they closed the earthly paradise; protected Lot; saved Hagar and her child; stayed Abraham's hand; communicated the law by their ministry; led the People of God; announced births and callings; and assisted the prophets, just to cite a few examples.194 Finally, the angel Gabriel announced the birth of the Precursor and that of Jesus himself.195

333 From the Incarnation to the Ascension, the life of the Word incarnate is surrounded by the adoration and service of angels. When God "brings the firstborn into the world, he says: 'Let all God's angels worship him.'"196 Their song of praise at the birth of Christ has not ceased resounding in the Church's praise: "Glory to God in the highest!"197 They protect Jesus in his infancy, serve him in the desert, strengthen him in his agony in the garden, when he could have been saved by them from the hands of his enemies as Israel had been.198 Again, it is the angels who "evangelize" by proclaiming the Good News of Christ's Incarnation and Resurrection.199 They will be present at Christ's return, which they will announce, to serve at his judgement.200

The angels in the life of the Church

334 In the meantime, the whole life of the Church benefits from the mysterious and powerful help of angels.201

335 In her liturgy, the Church joins with the angels to adore the thrice-holy God. She invokes their assistance (in the Roman Canon's Supplices te rogamus. . .["Almighty God, we pray that your angel..."]; in the funeral liturgy's In Paradisum deducant te angeli. . .["May the angels lead you into Paradise. . ."]). Moreover, in the "Cherubic Hymn" of the Byzantine Liturgy, she celebrates the memory of certain angels more particularly (St. Michael, St. Gabriel, St. Raphael, and the guardian angels).

336 From infancy to death human life is surrounded by their watchful care and intercession.202 "Beside each believer stands an angel as protector and shepherd leading him to life."203 Already here on earth the Christian life shares by faith in the blessed company of angels and men united in God.

337 God himself created the visible world in all its richness, diversity and order. Scripture presents the work of the Creator symbolically as a succession of six days of divine "work", concluded by the "rest" of the seventh day.204 On the subject of creation, the sacred text teaches the truths revealed by God for our salvation,205 permitting us to "recognize the inner nature, the value and the ordering of the whole of creation to the praise of God."206

338 Nothing exists that does not owe its existence to God the Creator. the world began when God's word drew it out of nothingness; all existent beings, all of nature, and all human history are rooted in this primordial event, the very genesis by which the world was constituted and time begun.207

339 Each creature possesses its own particular goodness and perfection. For each one of the works of the "six days" it is said: "and God saw that it was good." "By the very nature of creation, material being is endowed with its own stability, truth and excellence, its own order and laws."208 Each of the various creatures, willed in its own being, reflects in its own way a ray of God's infinite wisdom and goodness. Man must therefore respect the particular goodness of every creature, to avoid any disordered use of things which would be in contempt of the Creator and would bring disastrous consequences for human beings and their environment.

340 God wills the interdependence of creatures. the sun and the moon, the cedar and the little flower, the eagle and the sparrow: the spectacle of their countless diversities and inequalities tells us that no creature is self-sufficient. Creatures exist only in dependence on each other, to complete each other, in the service of each other.

341 The beauty of the universe: the order and harmony of the created world results from the diversity of beings and from the relationships which exist among them. Man discovers them progressively as the laws of nature. They call forth the admiration of scholars. the beauty of creation reflects the infinite beauty of the Creator and ought to inspire the respect and submission of man's intellect and will.

342 The hierarchy of creatures is expressed by the order of the "six days", from the less perfect to the more perfect. God loves all his creatures209 and takes care of each one, even the sparrow. Nevertheless, Jesus said: "You are of more value than many sparrows", or again: "of how much more value is a man than a sheep!"210

343 Man is the summit of the Creator's work, as the inspired account expresses by clearly distinguishing the creation of man from that of the other creatures.211

344 There is a solidarity among all creatures arising from the fact that all have the same Creator and are all ordered to his glory: May you be praised, O Lord, in all your creatures, especially brother sun, by whom you give us light for the day; he is beautiful, radiating great splendour, and offering us a symbol of you, the Most High. . .

345 The sabbath - the end of the work of the six days. the sacred text says that "on the seventh day God finished his work which he had done", that the "heavens and the earth were finished", and that God "rested" on this day and sanctified and blessed it.213 These inspired words are rich in profitable instruction:

346 In creation God laid a foundation and established laws that remain firm, on which the believer can rely with confidence, for they are the sign and pledge of the unshakeable faithfulness of God's covenant.214 For his part man must remain faithful to this foundation, and respect the laws which the Creator has written into it.

347 Creation was fashioned with a view to the sabbath and therefore for the worship and adoration of God. Worship is inscribed in the order of creation.215As the rule of St. Benedict says, nothing should take precedence over "the work of God", that is, solemn worship.216 This indicates the right order of human concerns.

348 The sabbath is at the heart of Israel's law. To keep the commandments is to correspond to the wisdom and the will of God as expressed in his work of creation.

350 Angels are spiritual creatures who glorify God without ceasing and who serve his saving plans for other creatures: "The angels work together for the benefit of us all" (St. Thomas Aquinas, STh I, 114, 3, ad 3).

351 The angels surround Christ their Lord. They serve him especially in the accomplishment of his saving mission to men.

352 The Church venerates the angels who help her on her earthly pilgrimage and protect every human being.

353 God willed the diversity of his creatures and their own particular goodness, their interdependence and their order. He destined all material creatures for the good of the human race. Man, and through him all creation, is destined for the glory of God.

354 Respect for laws inscribed in creation and the relations which derive from the nature of things is a principle of wisdom and a foundation for morality.

212 St. Francis of Assisi, Canticle of the Creatures.