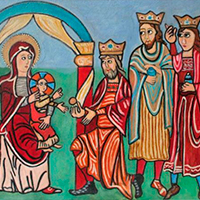 "We have come to worship him" (Mt 2:2) The story of the "Adoration of the Wise Men" is one of the best known in the life of the Lord.

The word magus, the singular form of magi, is probably derived from an ancient Persian word for priest.

Tradition tells us that their names were Caspar, Melchior and Balthassar. The men were astrologers who were looking for the star that would lead them to the promised Messiah.

The original story can be found in Matthew 2. After Jesus was born, "behold, there came wise men from the east to Jerusalem". They had seen a star that they considered indicative of the birth of the King of the Jews and had come to Jerusalem to find the child. When king Herod heard of their search, he wanted to know more about this possible competitor. His priests and scribes told him that such a king was to be born in Bethlehem, according to Micah's prophecy. Herod now sent for the three wise men and told them to go to Bethlehem and report their findings to him. This Herod was in fact King Herod I, a.k.a. Herod the Great, tetrarch of Judea, who lived approx. from BC 73 to 4, and who governed the Judea region under Roman rule. He was not very popular among the Jewish population, mostly due to his attempts to enforce a Hellenistic culture.

The star guided the three men to Bethlehem where they discovered the child in the house the star stood over. The men offered the child their gifts: gold, incense and myrrh (a resin with a pleasant smell). This event is known as the Adoration of the Magi. That night, God told them in their dreams to ignore Herod's orders. The next day the Magi departed, avoiding Jerusalem on their way home.
When Herod learned that the wise men had deceived him, he saw no other option than to have all Bethlehem children under the age of three murdered. Jesus and his parents had already escaped to Egypt: Joseph had been warned by an angel, also in a dream.

If we do as the Three Kings and humble ourselves before Our Lord, putting Him first, then it means loving Our Lord is our key priority. When we make ourselves, another person, possessions or money the center of our attention, we are paying homage to someone or something that will never love us the way Christ does. No one can love us more than Christ.