Family
Marriage
If the Church is Boring or Redundant is Marriage Too?
Marriage 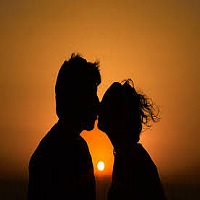 When I was a newlywed (only five years ago) I often wondered when the buzz would wear off. It didn’t seem to for the longest time. See, newlywed is so much more than a status relative to your wedding date; it’s a way of life for newly married couples.

“You two are obviously newlyweds, when did you get married?” any given onlooker would ask. We’d reply in unison (like newlyweds), “We’ve been married for 6 months.”

“Oh yeah, you’re still newlyweds.” That went on for about a year and a half and I started to realize in that time that it was more because of our outward expressions that people knew. We didn’t mind.

Fast forward to a few years later and we started actually looking like a married couple. Fights and tears — we had to start figuring out how to put up with the things we were looking past before. Once we got past that hump though, things started to really take shape into this wonderful and exciting experience. Not without its revolving set of challenges, we were better equipped to handle those tough moments and each other’s (as well as our own) failures.

Skip a few chapters again, and our conversions made this whole “the Catholic Church is boring and redundant” thing make sense. We all have heard that our marriages and families are a “domestic church.” We have the marriage act, which is the consummation of the covenant we have made, which gives life. It mimics the plan God is displaying with the New Covenant. The mutual and subsistent love between the Father and the Son produces the Holy Spirit and the New Covenant is like the marital act because it is the act that gave life. God breathed this into Adam and Jesus breathed this into the Apostles.

Jesus set up the foundation for His Church before he left earth, but it was consummated in the Holy Spirit which gave new life. Like the newlywed Church, the outward expressions were plentiful in the beginning. Wasn’t your marriage?

Kissing on your wife and your wife kissing on you, all leading to several acts of affection. But it did die down. It didn’t die completely though, and you were warned about this. People made sure you knew that sex wasn’t going to fix your problems and the thrill of finally being married would wear off.

The early Church went through the same thing. The Montanist’s were a heretical sect of the transitional period between the first and second centuries. The incredible outpourings of the Holy Spirit were few and the outward signs of being a Christian were shrinking in frequency. A group of people, under the inspiration and leadership of Montanus, thought the only signs of authentic Christianity were through ecstasies, miracles, and healings. So they preached that if you didn’t have those, you weren’t Christian. They cut themselves off from all Bishopric authority and support and eventually died out. Their little marriage couldn’t support the demands they were making.

Where am I going with all of this?

I always treated my marriage as a little church, but once I joined the Catholic Church several of the once “boring” things made sense. How long has the Mass been the way it is? Not counting the revisions and some minor changes here and there, it’s been the same for about 1800 years. But Protestants are constantly coming up with the newest and hippest ways of staying attractive. Before I left Protestantism I was worshiping with lights almost completely out, strobes and concert lights beaming, and volume cranked up. So the music at Mass was a little boring at first. The Gregorian chant didn’t really get my heart racing. Good thing I didn’t convert for the music right? But the strobe lights and the smoke and the mirrors don’t really make a lasting effect on hearts. The stage pieces change after so many uses; they get boring. Sex got a little less interesting too, right? That one dish your wife made got dull. Your husband’s cute [insert cute thing here] got regular.

The Catholic Church has stunning and timeless appeal though. The Rose Window at Notre Dame Cathedral in Paris has stood the test of time. Because of the lack of everyday beauty in its early days, its pilgrims who traveled to see it sometimes converted on the spot. They couldn’t imagine anything more beautiful than the Church. The Gregorian chant stands the test of time too, artistically and practically as it creates a perfectly timed theme that allows for reflection and response. See, the Church has been around long enough to know what works and what doesn’t. Your marriage will be around long enough to know what works and what doesn’t. You will get past the experimental stages and figure out what you like. Not just in the marital act, but in the foods you serve and the chores you share or the roles you play.

Our wonderful Mother Church might at some points seem dull and regular just like our marriages become, but they both have the strength and life that the early newlywed stage just isn’t capable of supporting. Marriage, like a fire, starts with a little kindle, quickly leading to a huge mass of flames, and then into incredible embers that produce a radiant and lasting warmth. You can’t light the bigger logs without those embers to sustain it and your domestic church needs that same foundation and maintenance.

Catholics are often accused of being “religious” and “redundant” from the outside when observing the outward acts. That’s no surprise as even the Rose Window looks commonplace from the outside.
The comparison is the same with marriage. People are avoiding it because their concerns are below the waist and they are afraid that things might get a little routine. Both are shallow observations. The Catholic Church knows what is right and what works not by pure authority, but through attrition. The themes and props that didn’t last were thrown out and the modes that didn’t inspire weren’t kept. We have the promise of Jesus to know our Church won’t die (Matthew 16:18), but the beauty and appeal of the Church is kept by experience.