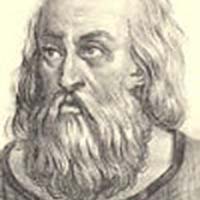 Roman martyrology: A hermit who came to Rome from the East and publicly protested against the inhuman gladiatorial combats in the Roman Amphitheatre.

Etymology: From the Greek name of the son of Odysseus and Penelope in Homer's "Iliad" and the "Odyssey.” Meaning "who combats far."

It was not thus in the days of the Roman Empire. Pagan sports-lovers had become inured to games in which killing was the main purpose. True, the sport of throwing Christians to the wild beasts was cancelled after 313 AD, when the Emperor Constantine decreed legal toleration for Christianity. But another bloody spectator-sport still continued: the gladiatorial games. They were essentially duels to the death in the arena.

One day, however (around 400), a devout monk from the East arrived in Rome. Not much is known about him. His name is usually given as  Telemachus, but it was more likely Almachius. During his sojourn in the Eternal City, the story goes, he went to a stadium one day to see what these gladiatorial games were all about.

When St. Almachius beheld the two current contestants hacking each other to bits as the blood-drunk crowd egged them on, he was horrified. Unwilling to stand it any longer, he rushed down the bleachers, vaulted the arena wall, and, running over to the combatants, tried to separate them before they could do each other further harm. Had not God forbidden man to kill - particularly to entertain a savage mob?
When the mob saw what was happening, they went wild. Not with approval but with fury! Who was this busybody interfering with the fun? They would soon stop his nonsense. The angered spectators surged forward as one many into the arena. Grabbing stones as they went, Almachius he was beaten down to the ground, and torn in pieces, on the 1st of January, 404, until he lay dead where he had come to prevent death

In the end, however, Almachius triumphed over his executioners and their ilk. News of the tragic event was conveyed to Honorius, he hailed the monk as a Christian martyr, and in 404 AD he issued a decree forbidding all gladiatorial games forever after.