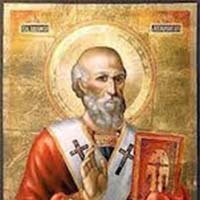 Roman martyrology: In Ruspe City Bizacena (now Tunisia), St. Fulgentius, bishop, who after being Attorney Bizacena, embraced the monastic life. During the persecution by the Vandals he suffered a lot because of the Arians and was exiled to Sardinia by king Thrasamund. He devoted the rest of his life to feed their faithful with words of grace and truth.

Etymology: From the latin, meaning  "shining".

Bishop of Ruspe in the province of Byzacene in Africa, eminent among the Fathers of the Church for saintly life, eloquence and theological learning.

Born 468 as Fabius Claudius Gordianus Fulgentius of Carthage, he was a Roman of senatorial rank. As a young man he held the position of procurator in the Vandal administration and was responsible for the collection of taxes. Later he felt a call to the religious life and decided to become a monk after reading Saint Augustine's Exposition on Psalm 36.

His mother, widowed, opposed Fulgentius' religious career, but he became a monk. He became abbot with Felix but had to flee the monastery in 499 when Vandals or Numidians invaded, going to Sicca Veneria. Retuming to the area, Fulgentius was named bishop of Ruspe, circa 508. King Thrasamund, an Arian, banished Fulgentius to Sardinia, Italy where he and other bishops were aided by Pope St. Symmachus . Fulgentius founded a monastery and wrote such eloquent defenses of orthodox Catholic doctrines that King Thrasamund returned him to his see, only to banish him again. In 523, Fulgentius returned to his see, where he set about rebuilding the faith. He died at Ruspe on January 1, 527.

Fulgentius was a keen student of the writings of Saint Augustine, and his form of monasticism clearly follows the mind and way of life of the saint. In fact, he was popularly known as the pocket Augustine. He loved the ideal of community life and the actual living of it, and founded several monasteries in Africa as well as while in exile.