In our first year of marriage, that was our first major argument as a couple. Creating new traditions, unique to us as a couple, has been one of the most enjoyable aspects of each passing holiday season.


Author: Paul and Sarah Jarzembowski | Source: For your marriage 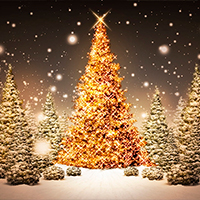 Tinsel or garland? Real or fake?
In our first year of marriage, that was our first major argument as a couple. We were looking forward to our first Christmas together, and each of us had our family traditions in mind when we imagined what that might look like. Paul had grown up with tinsel-covered artificial trees, put up over Thanksgiving weekend. Sarah’s family had real trees, wrapped in garland that they bought only a few days before Christmas.

So when the holiday season arrived in our house for the first time, we had to figure out what we would do. After some heated discussions and some false accusations (such as: “You don’t care about my family, do you?”), we finally came to a decision: garland on a fake tree, put up the first or second week of December.

Some might call this a merger, but in reality, it was something better. Merging traditions would mean we had a hodgepodge of this and that from each of our family rituals. And while we did some of that initially, it never truly satisfied.

What we discovered that first Christmas is that we needed to create our own traditions, some borrowed from our respective families, but most of it from ourselves.

Creating new traditions, unique to us as a couple, has been one of the most enjoyable aspects of each passing holiday season (and yes, we mean “holiday” because it encompasses new traditions at Halloween, Thanksgiving, Christmas, and New Year’s).

In the past few years, we have created all kinds of new traditions at Christmas. On Christmas Eve, we often get a hotel room in downtown Chicago or one of the other suburbs (because hotels are really affordable on that particular day of the year), have a nice dinner, and head out to a Midnight Mass near the hotel. Another tradition we have is pulling out and watching our favorite Christmas movies by the fireplace, or finding a movie theatre that’s showing a classic like “White Christmas” or “It’s a Wonderful Life.” These and other moments are unique to the two of us, unlike anything Sarah’s or Paul’s families did when we were growing up.

The oddest thing that has come with creating our new traditions is the disorienting feeling we have had if and when we head “home” at Christmas. One year, we went to Philadelphia to visit Sarah’s family, and while it was wonderful to reconnect with everyone, it didn’t feel like “home” anymore. Instead, that warm, special feeling came when our plane touched down at O’Hare Airport. We had come “home” to the place where our new traditions were forged and nurtured.

It might be bittersweet to leave our old traditions, but it is even more exciting to create new ones (like garland on a fake tree) that are unique, special, and fitting just for us.

Questions for Discussion:
•    What will you do as a couple this holiday season that will focus on religious side of your partnership?
•    Why are traditions an important part of our lives?
•    What family traditions have you appreciated most?
•    Which traditions are you not willing to let go?
•    How can these be incorporated into your spouse’s desires?