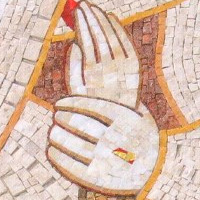 "On Friday during Holy Communion, He said these words to His unworthy slave, if I mistake not: I promise you in the excessive mercy of my Heart that its all-powerful love will grant to all those who receive Holy Communion on nine first Fridays of consecutive months the grace of final repentance; they will not die under my displeasure or without receiving their sacraments, my divine Heart making itself their assured refuge at the last moment."

With regard to this promise it may be remarked:

(1) that our Lord required Communion to be received on a particular day chosen by Him;

(2) that the nine Fridays must be consecutive;

(3) that they must be made in honor of His Sacred Heart, which means that those who make the nine Fridays must practice the devotion and must have a great love for our Lord;

(4) that our Lord does not say that those who make the nine Fridays will be dispensed from any of their obligations or from exercising the vigilance necessary to lead a good life and overcome temptation; rather He implicitly promises abundant graces to those who make the nine Fridays to help them to carry out these obligations and persevere to the end;

(5) that perseverance in receiving Holy Communion for nine consecutive First Firdays helps the faithful to acquire the habit of frequent Communion, which our Lord eagerly desires; and

(6) that the practice of the nine Fridays is very pleasing to our Lord since He promises such great reward, and that all Catholics should endeavor to make the nine Fridays.