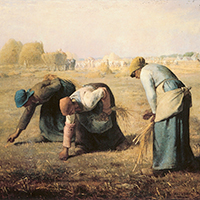 Holy Gospel of Jesus Christ according to Saint Mark 2: 23-28.
As Jesus was passing through a field of grain on the sabbath, his disciples began to make a path while picking the heads of grain. At this the Pharisees said to him, "Look, why are they doing what is unlawful on the sabbath?" He said to them, "Have you never read what David did when he was in need and he and his companions were hungry? How he went into the house of God when Abiathar was high priest and ate the bread of offering that only the priests could lawfully eat, and shared it with his companions?" Then he said to them, "The sabbath was made for man, not man for the sabbath. That is why the Son of Man is lord even of the sabbath."

Petition:
Lord, help me to pray for and serve those who persecute me and  to win them over to the Gospel through love, just like you did.

1. "Unlawful on the Sabbath":
How dire was mankind's need for a Savior! The Jews were God's chosen people; they had received God's own revelation in the Old Testament. The Pharisees were the religious leaders of the Jewish people. Yet they buried God's law so deeply beneath layers of man-made precepts that hungry men were not allowed to pick grain in order to eat on the Sabbath. The law had become an end in itself and had taken precedence over persons in need. How could mankind ever be led safely along the true path to salvation without becoming hopelessly entangled in the thickets of false rituals and arbitrary precepts? The Son of God, the Eternal Word of the Father, humbled himself to become the Son of Man in order to bring us the fullness of truth. But Christ did much more than bring us the fullness of God's revelation. He gave us the strength, through his own life of grace within us, to live out that truth in our lives. Am I sufficiently tapped into that source of grace in my life?

2. Seeking to Win over Enemies:
If we were in Christ's place, what would have been our reaction to the Pharisees? Perhaps we would have yielded to their imposing presence. Maybe we would have summoned up our courage and dismissed their intransigence without even deigning to reply. Christ reveals both his fearlessness and his goodness of heart by seeking to win them over. He quotes the Scriptures that they believe in and cites 1 Samuel 21:1-6. David and his men, fleeing from Saul, eat the holy bread of the Presence: twelve loaves placed each morning on the table in the sanctuary, as homage to the Lord from the twelve tribes of Israel. When they were withdrawn to make room for fresh ones, these loaves were reserved for the Levitical priests. Christ seeks to reveal to the Pharisees, in a way they can accept, that they have gone astray from true religion, in which love of God and neighbor takes precedence over following rules. Christ sums up the nature of true religion and points out the Pharisees' error in one sublime sentence: "The sabbath was made for man, not man for the sabbath."  Do I perceive the burden Christ has given me as light? That is what he intends and promises. If I do not, why not?

3. Lord of the Sabbath:
Christ does not stop with revealing the nature and purpose of true religion. He makes a bold proclamation, one which must have stunned the Pharisees, and perhaps even widened the eyes of his own disciples: "The Son of Man is lord even of the Sabbath." Christ declares in no uncertain terms that his authority is equal to that of God himself, who instituted the Sabbath at the dawn of man's creation. Christ wants from the Pharisees nothing less than an act of faith in his own divine person. His heart longs to save them. Christ yearns to bring to salvation everyone he encounters, including his enemies. Does my own zeal for souls bring me to reflect something of Christ's courage and love when I am faced with opposition? Do I desire and seek what is good for everyone regardless of their attitude towards me?

Conversation with Christ:
Thank you, Lord, for becoming a man to save us in our dire need for you. Thank you for loving even your enemies and seeking to win them over to your new life. Help me to love more like you did. Help me to realize the value of a single soul.

Resolution:
I will pray and make sacrifices for someone who is persecuting me or the Church. Forgetting about myself, I will look for ways to bring them to experience the love of Christ.