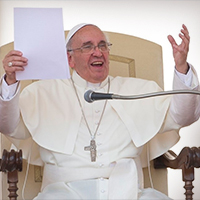 Young people should be hungry for an authentic Christian life and adults should set an example. This message was at the heart of Pope Francis’ catechesis on Wednesday morning in St. Peter’s Square.

Pope Francis began a new series of catecheses on Wednesday focussing on the Ten Commandments.

Addressing those present in St. Peter’s Square for the General Audience, the Pope reflected on the Gospel passage of the day in which a young man asked Jesus: “What must I do to inherit eternal life?”

“That question, he explained, contains the challenge of every existence: we all wish for a full and eternal life. But what path must we walk to achieve one?”

With a specific appeal to the young, Pope Francis pointed out that concrete problems, however serious or dramatic, do not pose the greatest challenges.

“The greatest challenge in life” he said is to avoid being mediocre and fainthearted: if a young person settles for a life of bland mediocrity, even if he or she follows the rules, he will not live a full and authentic existence.

“We must ask the Lord to give today’s youth the gift of healthy restlessness” he said, stressing that young people must hunger for a life of fulfillment and beauty.

Pope Francis recalled that Jesus tells the young man to follow the Commandments, but then points him to something greater, because it is clear that the young man does not have a full life.

He said that the transition from youth to maturity takes place when one begins to “accept one’s limits” and becomes aware of what is lacking.

No to Christians with shrunken hearts

Jesus, the Pope said, invited the young man who has always obeyed the Commandments to take an extra step, sell what he possesses, give to the poor and follow him, with the promise that in this way he will have “treasure in heaven.”

Inviting those present to choose the rich and fulfilling life offered to us by Jesus, he said “it is not nice to meet ‘faint-hearted Christians’, those with ‘shrunken hearts’ who are happy with not going the whole way.

This story shows us that Jesus came, “not to abolish the Law but to fulfil it” Francis explained, because the Lord wishes to give us something greater.

Thus, he explained, the young man had reached a threshold and was challenged to take a leap whereby the possibility of ceasing to live only for himself and to embrace Jesus’s offer for “true wealth” became a concrete reality.

Francis concluded saying that in the new series of catecheses “we will take Moses’ two stone tablets” and walking in the footsteps of Jesus we will discover the door through which we can follow Him to the fullness of life: his life and our life as God’s children.