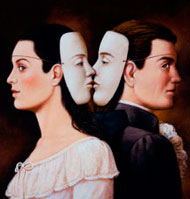 The Situation
We have only been married a short time, and things are going pretty well between us, but something that concerns me is that we don’t really solve problems. One of us raises an issue, we talk about it a little, and then we let it drop. For instance, I think he watches too much TV. When I complain he says “sorry” and then just goes back to watching sports every night. He thinks I spend too much money on unnecessary things, so I just don’t show him the things I buy any more.
What worries me is that eventually, when we have a real problem we can’t avoid, we won’t know how to deal with it. Are there any strategies for a couple like us to use?

A Response
Your situation is not an uncommon one in early marriage, but you are smart to want to learn some conflict resolution techniques before you have a major dilemma on your hands. There’s no reason to assume that solving conflicts would come naturally. It’s a skill you learn and then practice, so that you develop “muscle memory,” a response that will come more easily when you are in a conflictual situation.
The first step in bringing up a problem is to start with an appreciation for the other person. In the situation above, you might begin by saying, “I appreciate how hard you work. You really make me feel like our future is secure because you have such a good work ethic.” This is the person you love and chose to marry so surely there is something in the situation that you appreciate or admire. Then move on to your view of the current situation. “I know when you come in you want to relax, but when you watch sports all evening I feel like there’s no time for us.”

The next step is for the other person to make sure they have heard their partner’s concern correctly. In this example your husband might say, “So you feel like I’m watching too much TV?”
This may or may not be what you were saying. You might be objecting to watching too much TV, or you might be saying TV is okay, but let’s watch something other than sports. It’s important for both people to know that they are addressing the same concern.

If he doesn’t have it right, then tell him. Say, “No, that’s not it. I just don’t know much about football or hockey, so I can’t share with you when that’s what you’re watching. We could watch a game show together, or a mystery, or a movie at least some of the time. I like all those things.”
Once he understands what your concern is, then you can work to find a compromise. One night, your husband might watch the game; the next, the two of you can watch a movie of your choosing.
The same approach would work with a spouse who spends too much. He expresses his appreciation (“I appreciate that you want our home to look attractive”) and raises his concern about the family budget. She lets him know she’s heard his concern. Finally, they reach a compromise. There are many different solutions. The right one is the one that feels fair and comfortable to the two of you.
Sometimes, though, the conflict is about something one person did that is wrong; it’s not just a difference of opinion. If she ran up the credit card debt, if he got a speeding ticket and had his license suspended–those situations would be harder to deal with.

That kind of conflict requires one person to apologize, which is another habit worth cultivating. Apologizing is not the casual “sorry” that doesn’t have any real contrition behind it. A real apology is an admission that something has happened to offend the other person. It means taking responsibility for one’s action and making a plan to see that it will not happen again. Apologizing comes as a result of a conversation that allows the injured party to express how hurtful the incident was. These are not easy conversations, but they do allow the air to be cleared.

The other side of apologizing is forgiving. When an honest conversation has taken place, and one person has truly apologized, the onus is on the other person to offer forgiveness. Saying “I forgive you” and meaning it is every bit as important as saying “I’m sorry” and meaning it. Marriage Encounter has an expression, “No Museum Keeping,” which means that if an offense has been forgiven, it is wiped off the record and cannot be brought up again. That doesn’t mean that if a similar issue comes up it can’t be addressed again. It just means that the prior offense cannot be revisited.
Big conflicts don’t come along frequently in most marriages. Small ones happen all the time, so these new skills can be practiced on the little differences that might otherwise get swept under the rug. Then when the best tools are needed, they will be clean, sharpened, and ready for use.