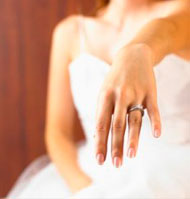 When Courtney crossed the stage to receive her diploma a small crowd in the hall exploded in applause. Her husband Stan cheered loudly, standing with both hands in the air.  Exiting the stage, she looked up, pointed to Stan and blew a kiss.

That said it all!

They both knew this moment was a joint victory for them, the culmination of a “steady persistent course of action…in spite of difficulties and discouragement” [perseverance, Webster’s dictionary].   While writing papers and completing an internship, Courtney worked part-time, sharing care of their 18-month-old son with Stan, who worked one and a half jobs to make ends meet.

When they married, they agreed to support each other in completing their education and career plans.  But they didn’t anticipate the monetary or emotional cost: days without a decent conversation, weekends without time for relaxation or intimacy, less money for clothes and entertainment, periods of resentment and self-pity.   Courtney and Steve faced an unanticipated challenge together yet succeeded in fulfilling  their dream for a better future.

Stan and Courtney are models of perseverance. So, too, are Dick and Nancy, who emerged from Dick’s stroke with a radically altered life style, and Imelda and Jose, who worked round-the-clock for three years  to start their small business.

With a divorce rate of almost 50%, it’s inspiring to meet couples who struggle, facing difficulties and overcoming them with a stronger partnership and a deeper commitment to their marriage.  What makes such perseverance possible for some and not for others?  Is it just a matter of gutting it out or is there some magic formula for which challenges yield stronger relationships?

Every couple I have ever known has times when they are disillusioned, angry, depressed, tired, or just plain ready to give up. It could be over money, work, kids, alcohol, the house, sports, sex, or in-laws.  Why do some couples persevere and others give up trying to make things work?

As I talk with both newly marrieds and seasoned couples, three things seem to be present in couples who persevere through difficult times.

The first is the ability to hope. Hope in marriage is about believing in a shared but unseen future. Hope is more than optimism.  Hope that perseveres is an orientation of the spirit that springs from a source beyond us. To endure, couples need a positive vision to work toward when the present moment looks grim.

When Amy was on bed rest at the end of her pregnancy and Tom was picking up the slack, their hope in the possibility of a healthy baby got them through. When Dick couldn’t walk after his stroke, he and Nancy hoped for future good times with their grandchildren. The scriptures emphasize the importance of hope. “For in hope we were saved.  Now hope that sees for itself is not hope.  For who hopes for what one sees?  But if we hope for what we do not see, we wait with endurance” (Romans 8:24-25).

The second key to perseverance is the ability of both spouses to sacrifice for a better future. While Courtney worked evenings, Stan gave up his poker night with the guys to babysit.  There were no vacations, expensive concerts or pricey bottles of wine during graduate school.

Noted marriage researcher Scott Stanley’s studies of sacrifice in marriage show that when both spouses are willing to sacrifice it is a powerful way of expressing love for each other.  Sacrifice says what is good for you is important to me.  I love you enough to give up my own time and energy for your good. For Imelda and Jose, it meant not having new clothes or nice furniture for almost three years so that all their resources could be invested in a growing business that could support their family in the future.

The third characteristic of persevering couples is faith—in themselves, in one another and in God. Until they faced difficulties, Patrice and Sheldon were unaware that God was with them in their marriage relationship. But when the going got tough, they began to ask for God’s help in resolving their bitter fights and arguments.  They experienced being changed through prayer and confidence in God’s power within them.

“It wasn’t like a bolt of lightning or anything,” commented Sheldon.  “I had prayed for help at work and when playing sports, so I started to pray for help at home.  Then we started to pray together.  That led us to learning new ways of communicating with each other. We just slowly began to realize that we couldn’t overcome this by ourselves because we were both part of the problem.” Even when we have only a tiny bit of faith in ourselves or in God, prayer can sustain us.

Courtney and Tom’s graduation celebration, like the success of Jose and Imelda in persevering through difficult times, is directly related to the promise they made on their wedding day to love and honor each other forever. Today, when many have lost confidence in married love, they prove it is possible!

When couples persevere, they bring this unique steadfast love into their families, their communities and into the world.  It is encouraging to see that the love St. Paul speaks about in his letter to the Corinthians is possible for all of us: “Love is always ready to make allowances, to trust, to hope and to endure whatever comes. Love never ends ” (Corinthians 13:7,8).