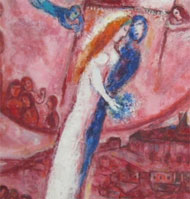 A world heritage marriage
Evocations around Hector and Andromache
A few years ago, at the end of the last century, Homer spoke to us in a newscast. He spoke in Greek and with a woman's voice, for a common surprise. Yes, the poet years left his distance of twenty-eight centuries and became mediatic for a moment.