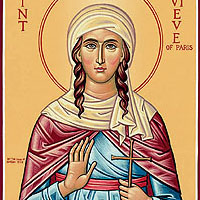 Roman martyrology: In Paris, France, Saint Genevieve, virgin of Nanterre, took at fifteen the veil of virgins, advised by Bishop Germanus of Auxerre. She encouraged the people of the city, threatened by the incursions of the Huns, and helped their fellow citizens in famine.

Etymology: From Genovefa, a Gaulish name possibly meaning "That one which is as white as the foam of the sea" and or from the attribute Celta origin, meaning "That which is noble or good caste."

St. Genevieve was born about the year 422, at Nanterre near Paris. While still very young, she desired to devote her life to Jesus. After her parents died, Genevieve went to live with her grandmother where she spent time praying every day. She became very close to Jesus and wanted to bring his goodness to people. Genevieve was a kind, generous person and went out of her way to do good things for others.

When Genevieve was seven years old, St. Germain of Auxerre came to her native village on his way to Great Britain to combat the heresy of Pelagius. The child stood in the midst of a crowd gathered around the man of God, who singled her out and foretold her future sanctity. At her desire, the holy Bishop led her to a church, accompanied by all the faithful, and consecrated her to God as a virgin.

When Attila was reported to be marching on Paris, the inhabitants of the city prepared to evacuate and run away from a terrible army coming to attack them. Genevieve stepped forward, persuaded the people to avert the scourge by fasting and prayer, assuring them of the protection of Heaven and to trust in God. She said that if they did penance, they would be spared. The people did what she said, and the event verified the prediction, for the barbarian suddenly changed the course of his march.

Before she died, The city of Paris already considered her as their patron, and ever since has been invoked in times of great public calamities, and has fought many times to cities and towns of plagues, famines and invasions of enemies.

She died of old age in the year 512.  A famous temple was built over her grave until the French Revolution destroyed it. The Pantheon, where the French heroes are buried, was built instead.

The life of St. Genevieve was one of great austerity, constant prayer, works of charity and obedience to God's will every day of her life, not just in times of need. She never gave up trying to do as much good as possible. Her faithfulness to Jesus and courage, are the special lessons she left for us.