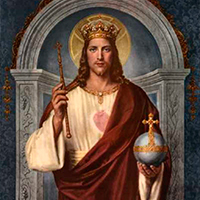 Seeking the face of God is a necessary path, which must be traveled with sincerity of heart and constant effort. These are words of John Paul II, in a homily delivered on 13 January 1999, in the Paul VI classroom at the Vatican. The expression “face of God” raises several questions, so for example, one may ask: What is the difference between seeking God and seeking the face of God? Since then the search for God is a task proper to our soul, for God is a pure spirit, just as is our soul, created by Him in his image and likeness and is through it and not through our body, which is pure matter.

The expression “face of God” is not new to anyone who has delved a little deeper into the Bible and of course in the Gospels, which are part of it. But there are two different conclusions to which this expression can lead us to the question: what it is?. There is a material conclusion and a spiritual conclusion. In the material order Christians have been trying to know what the physical appearance of the face of the Lord was like for 2000 years. Many icons have been created representing the face of the Lord, but none of them could be assured that this was the human face of the Lord. The artists, taking as models people, of physical characters, as perfect as possible they managed to find them, chose them as a model to represent the Lord or in their case our Lady, so the icons vary greatly in their physical aspects, according to the canons of beauty that ruled at the time when the paintings were billed. Currently, from the prints printed on the Holy Shroud deposited in Turin, several faces have been digitized, projecting in three dimensions these footprints. Entering the internet, you can see this face, if any reader is moved by curiosity.

The truth is that the fact that the face of the Lord is a more or less aesthetically pleasing image, can help certain people, to foster in them the love due to our Lord. But the important thing is that they are the eyes of our soul, those who look and contemplate the beauty of our Lord, who in no case, lies in the materiality of his physical appearance as a man, but in the infinite beauty of his spirit, which only the eyes of our soul can get to properly capture and value.

Unless, when John Paul II incites us to seek the face of God, he is not referring to the material face or appearance of his face, but to something much more important and transcendent such as the face of the Spirit of God. In the A.T. appears the word face 296 times, many of them alluding to the brightness or light of the face of God, so in the Pentateuch we are told: "The Lord enlighten his face upon you and be propitious. The Lord show you his face and grant you peace." (Nm 6.25-26). Here indirectly, we are marked with one of the qualities of the Face of God, which is that of the light emanating from Him. This divine light is now directly inaccessible to us and so St. John, the beloved disciple, writes: "No one ever saw God; Only begotten God who is in the father's sine, he has made known to him." (Jn 1:18).

But we are called to seek Him and thus in the psalms, in number 27 of them, we can read: "My heart knows that you said: Seek my face. I'm looking for your face, Lord, don't take it away from me. Do not leave your servant with anger, you, who are my help; don't leave me or leave me, my God and my savior. Even if my father and mother abandon me, the Lord will receive me. Tell me, Lord, your way and lead me on a flat path" (Psalm 27,8-11). And we are called not only to seek and contemplate, but to what is more important to be a reflection of it, of that divine Light emanating from the Face of God. Thus, St John tells us: "My dears, from now on we are children of God, and what we will be has not yet manifested itself. We know that when it manifests, we will be like him, for we will see him as he is." (1Jn 3.2). All this must lead us to consider that at the moment of our death, the veil of faith that we all have with more or less transparency, is not totally torn, faith does not disappear immediately becoming evidence, except for the souls that are directly introduced at once, in the glory of the vision of the Face of God. For those who feel the need to go before purgatory, the faith still subsides even partially.

The human soul, which does not overcome the test of love to which we are called here, will never be able to contemplate the face of God and of course the light that emanates from Him and his participation in the goods which also emanate from it. This divine light is a spiritual light of love, which has nothing to do with the material light that the sun gives us daily, or the light emitted by material fire, which in turn has nothing to do with the fire of a spiritual character. Those who have not chosen this light of love at the end of their lives will be eternal darkness.

In the Gospels, there is a very revelatory passage, in which the Lord puts as a relieve the importance of the vision of the face of God, which can only be contemplated and reflected, by a human soul or to be an already glorified angelic. In this regard the Lord says, "Beware of belittling one of these little ones; for I say unto you that his angels, in heaven, continually see the face of my Father who is in heaven." (Mt 18:10). If we think of ourselves as human beings, we immediately ask ourselves: How is it possible to be constantly seeing the face of God and at the same time, to be taking care of each of them of his protected? If we are mindful of the qualities of an already glorified body, we immediately see that this is the logical thing and cannot be surprised.

The continuous contemplation of the face of God does not deprive the glorified soul to perform any other heavenly activity that may be desired, although this should not frame it mentally within the time parameter, which for a soul that has already come out of this world is non-existent, whatever its final destination. In the contemplation of the face of God, his infinite qualities will always be reflected, in the glorified soul.

My warmest reader greeting and desire for God to bless you.