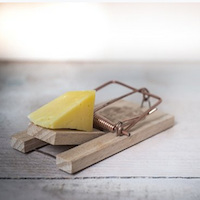 In the path of human history, as in our day, hundreds of abuses, traps, arbitrariness, favoritism, blackmail, wastefulness, corruption, small subtractions, and a long list of harmful acts have been committed and perpetrated.

In a store, the seller manipulates the scale and thus sells for the price of a kilo which weighs 900 grams.

In a factory, the section chief takes (steals) small pieces to sell them elsewhere, at the same time a worker pretends to work while playing with his mobile.

An office, an urgent procedure is "stuck" because the manager has decided to put the requests of several friends that will gratify him conveniently.

In A public department, the officer arrives usually late to his office, while the queues of the people show their discontent.

Also in the home, the person in charge of cleaning the dishes invents excuses to unload the task in another member of the family.

The traps occur in so many places, in so many ways, that it would almost be impossible to make a general picture of the situation.

The question arises: Why do so many people cheat? Where is the root of such a universal phenomenon?

Among the many aspects that could be used as an explanation, there is a very simple one: the aspiration to satisfy personal ambitions at the expense of anything.

If you want more rest, or more money, or more prestige, or more pleasures, or more power, and if you have a conscience hurt by sin, it will be easy to engage in traps to achieve what you crave.

In the face of this evil, healing can be easily interviewed: acquiring a healthy conscience, falling in love with justice, looking at others, and respecting their rights, fulfilling their obligations with joy.

Sometimes enough to break up widespread trap situations: an honest person shines in a particular way among his family, friends, acquaintances, and stimulates the change in those who know him.

It will certainly not be an easy task, especially when a good person is surrounded by corruption. But at least it will have initiated a path of justice that benefits the honest and others and teaches how it is possible to promote a more equal and more solidarity world.