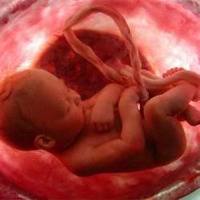 In the debates on abortion and on the alleged right There are several arguments, but the substance of the discussions revolves around how to consider the human being in its initial development period.

For some, embryos and fetuses would have no dignity, no value, but they would depend fully on what their mothers decide about them. If They love the son, they will seek nothing to prevent his birth. If They do not love it, advocates of the right to abortion consider that they can ask for their disposal.

Then there are associations of all kinds involved in the debate. Some group doctors and scientists. Others to jurists and politicians. Also involved are cultural groups, or promoters of women's rights, or associations that protect the disabled.

At the heart of the debate, the question follows: What value can a human embryo have? There is No way to circumvent this point, however many emphasize that it is a private matter for women, who decides according to their appreciation of what is in their bowels.

Then, the defenders of each viewpoint will seek to add consensus and support to the thesis themselves. They assume, therefore, that if they come to have more support, especially if they are offered by important agencies and personalities, their respective positions would appear as correct and, thus, as "winners" in the debate.

We know, however, that a thousand statements are not enough to assert the opposite of reality, nor to deny what would be according to it. The number of supporters or adversaries of a thesis does not automatically make it true or false.

In the subject of embryos and fetuses, we could identify two points that would help to overcome the logic of the votes and the lists of supports, to look at the core of the question.

The first is to recognize that all of us who were born were one-day embryos. In other words, all human beings who have exceeded the threshold of childbirth have lived for several weeks in a woman's bosom.

The second leads to evidence that the beginning of human life in difficult circumstances for a woman (unemployment, abandonment of the couple, discrimination against single mothers, etc.) cannot obfuscate what is happening in the bowels of a mother: she has Begun to exist within her a son.

These two points may be forgotten, even for some excluded, in the debate, which is extremely serious. Because discussing abortion is not a private matter that has no relevance to initial human life. The Point is to clarify the value of that life and how it deserves to be treated.

While the debate on abortion continues in some countries, while in others abortion has become a practice seen as fully standardized, the reality is that every year millions of women choose and ask for the death of their children, while other millions of Women are looking for concrete ways to reach the day of childbirth in the best conditions for them and their children.