Featured
articles
Well-carried discussions
The secret: A climate of respect, attention, and honesty. 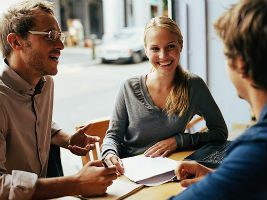 Arguing is much more enjoyable and productive when, along with respect, a climate of attention is encouraged to the different arguments and manipulations are avoided with which some seek to create confusion and tensions.

On these manipulations, an example among the thousands that could be noted. Two people are discussing recent news about the alleged corruption among politicians in a political party.

One claims that as long as the courts do not analyze the case, the defendant's innocence must be claimed. The other replies that to say that means to promote the cover-up and to leave the crimes of the politicians unpunished.

The manipulative maneuver of the second interlocutor is visible. Because defending the presumption of innocence does not mean being in favor of the cover-up of the culprits (as long as they are not proven to be).

If, as a reaction, whoever spoke in the first place responds with similar weapons and reproaches his opponent who incurs witch-hunt attitudes and contempt for those involved because he has ideological prejudices, the discussion will be red hot…

Therefore, in order for a discussion to be carried out in a proper way, one must look at the arguments offered and analyze them serenely, with well-defined objectives: To specify what each one defends, and then to evaluate it in its valid elements and in its possible Errors.

Only in this way will we be able to build well-carried discussions, those that bring people closer together and towards the truth, despite their initial differences.

When there is honesty and ideas are laid out serenely, then the interlocutors will understand better what is said on the other, and seek that correctable and that which is better in every point of view.