Featured
articles
If you want to break up with your girlfriend, lie down with her
breakup,illnesses,consequences, point of view, young people, premarital delivery, sexual relations 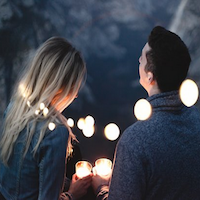 Among the women born at the end of the years 60, they have separated in the first five years of marriage, among which they cohabited previously, one fourth, and of which they were married directly, without previous cohabitation, something less than the four.

Anyone who has minimal contact with young people knows how vastly widespread premarital relationships are among young people. The social, cultural and above all environmental conditions are today unpropitious for premarital chastity. Most of the young people have not received proper religious and moral training and their sex education has been reduced to a mere instruction on how to prevent pregnancies and illnesses. For me, there is no doubt, and that is my experience as a confessor for many years, that the consequences of it are simply disastrous.

Indeed from the religious point of view, one must not forget that "God is Love" (1 Jn 4.8 and 16), and as sin is the opposite of love, what is sin does not favor love or lead to happiness. Let us also remember that in morality something is not good or bad because it is sent or banned, but it is sent because it is good and it is forbidden because it is bad. The Catholic Church teaches that the site of sexual intercourse and full sexual communion is marriage, because "it must be kept in the picture of marriage all human genital act" (Declaration of the Congregation for the Doctrine of the Faith "Human Person", No. 7). Also, the bride and groom "reserve for the time of marriage the manifestations of tenderness specific to conjugal love" (Catechism of the Catholic Church, n º 2350). This moral orientation is part of the assumption that the relationship between the sexes can only give good results when it is truthful when body language is an expression of a personal donation without reservation. "Consequently, sexuality, by which man and woman give each other with the own and exclusive acts of husbands, is not something purely biological, but affects the intimate nucleus of the person as such" (Exhortation of St. John Paul II "Family Is Consortio ", n º 11).

From a human point of view, burning stages is not convenient. These sexual experiences, especially among young people, are at risk of blocking their affective development towards maturity. As we get used to living sexuality at the level of pleasure, one becomes progressively incapable of experiencing it, even later, as a compromise. If the sexual encounter is just a self-centered, impulsive pursuit, one becomes incapable of feeling it as the delivery and acceptance of the other, thus failing to live it as a loving and long-term fidelity project. We have to do things at the right time.

Intimate relationships require a mutual commitment because each person delivers a lot of themselves. The full sexual relationship must express the presence of a full, mature, total and definitive love, and if not, ethically is not correct, as an act that is the maximum possible expression of love, should not be made between two people who, even though they are currently united, have not yet taken the step of exclusive delivery. In courtship the physical act is performed in the present, while personal donation will take place in the future: "I'll marry you."

The premarital delivery is not full, only partial, staying easily in simple satisfaction, so it is not uncommon that friendship in the couple not only does not get strengthened but is damaged. Although apparently, the previous coexistence seems to lead to greater stability of marriage, knowing both what is their life in common, we find that a study in Spain of the Center for Sociological Research (CIS) entitled survey on fertility and family of 1995, confirmed by other works and statistics of France, Sweden, and the United States, says that among the women born in the late 60 years, have been separated in the first five years of marriage, among which previously cohabited, a quarter, and of those who were married directly, without previous cohabitation, something less than four percent. In other words, the previous cohabitation, with its corresponding sexual relations, impairs the stability of the couple and the future marriage.

The reasons for this are personal insecurity, the fear of failure and loneliness, ignorance of the deep sense of love, and above all a debatable conception of marriage in which the religious dimension is absent. It is a relationship lacking commitment, decision, and risk, which ignores or dispenses with the help of grace, substantially tares interpersonal love and makes that at the slightest difficulty, as there is no ability to sacrifice, the relationship collapses love. In any case, it is not exactly an unconditional love. And is that "human love does not tolerate proof. It demands a total and definitive gift of people among themselves" (Catechism..., n º 2391).

The worst thing about this kind of relationship is that the grooms, both they and after having had several couples with whom the first thing they have done is to go to bed, they find that they are reaching a certain age, without a stable partner and no chance of forming a family. This disaster has led to this conception of sexuality that says that this is at the service of pleasure and not love, the mistake that is paying very expensive many of our young people today.