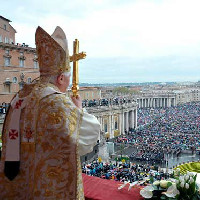 My tweets must have been retweeted to an unsympathetic audience because then there was a response that said that anyone with a conscience should stop belonging to the "corrupt, immoral, crime-filled Catholic Church."

I find it curious that in this anti-Catholic wave the new atheists and old fundamentalists resort to many of the same attacks on the Catholic religion. Hatred for the Catholic Church comes from all fronts and one of these attacks, which says that the Catholic Church is "corrupt, immoral and plagued with crimes", is the most typical.

No one stops to think that no Catholic understood argues that there is immorality, crime, and corruption in the Catholic Church.  We've always known.  In fact, the same Lord Jesus Christ said that sheep and goats would be mixed, and that wheat and straw would grow in the same terrain. In fact, among the holy Apostles were some who were less than saints. Judas was a traitor who sold the Lord and his soul for a bag of money and then hanged himself.  Peter was an eloquent traitor, Thomas, a skeptical timid, Paul, a violent and ignorant man and an accomplice to murder. The list could go on.

Of course, there is immorality, corruption, and crime in the Catholic Church.  What did you expect? A rigorous set of white makers of good works, smiling, neatly combed, with polished shoes and tie, handing out gospel pamphlets?  What did you expect? A group of nice old ladies who bake cookies and run a soup kitchen?  What did you expect? A group of sincere activists who scramble for a politically more correct world for all the people that should feel sorry for.  Surely you will find groups of makers of good works like that, but it will not be the Catholic Church, but rather a sort of terrifying sect in which they would not want to participate if they had the opportunity.

So, I don't really care if the Catholic Church is full of crime and corruption and a good deal of sinners, but it makes me feel at home.

We are not all happy with the crime, sin, and corruption in the Catholic Church, but we cannot imagine any other church.  Catholics are a work in progress and those who recognize that we are sinners feel comfortable with the other people who also continue to work on it.  As a group of Alcoholics Anonymous: Hi, my name is Dwight.  I'm a sinner. So, I don't really care if the Catholic Church is full of crime and corruption and a good deal of sinners, but it makes me feel at home.

Those who concern me are those who have pretensions of moral superiority and who blame the church for that.  Do they really think they're so much better than everyone else? Those are the people who give me the creeps and not the sad sinners who sit on the banks of the church week after week.  At least they know they need help.  And those who think they don't need help?  Yes, those are squeaky clean zombies that give me the creeps.