Featured
articles
The pope's message and the challenge to Catholics
The consequences of the pope's journey will be felt with the passing of the months and years. 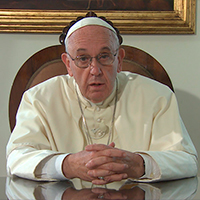 The consequences of the pope's journey will be felt with the passing of the months and years. It is clear, however, that it has left a universal message and thus a strong commitment to Catholics.

1.- The clear and strong messages of Francis, articulated in silences, attitudes, and words, ranging from the great national problems to the dramas of our daily life. They have a common denominator: the prophetic denunciation against the culture of the discard, whose origin is in the contempt to the life and dignity of the people, outrage that is independent of the simple legality of our actions. Sin, violence, and corruption do not improve because they are legal, nor do they become more insidious for being outlawed; Nor do they lessen their objective evil as they are done in public or in private.

2.- Francis articulates his messages motivated by his faith and, precisely because of this, they are equally challenging to the conscience of believers, agnostics, and atheists. His message is universal because, without relinquishing his identity, he can speak to each person's heart by trusting in the intelligence of his interlocutors, inside and outside the church. In other words, it is a challenging message because it puts in dialogue the reasons for the faith, with the reasons for the reason. It is a bridge builder and not a road destroyer.

3.- Articulates his messages without adhering to a particular ideology, for its ability to look at each person and from the concrete person to read reality. Thus, at the same time, he pays homage to the best of the Catholic tradition over two thousand years and teaches us the best way to communicate in our days. Teaching that should be assimilated by every Catholic on foot and by every pastor in the Church. We do not gain refugees in a self-referential discourse, let alone pretending a universal language detached from the faith, under the assumption that by diluting it we become more modern, or we will be better listened to. In both cases, we only succeed in nurturing that shameful Catholicism that prevents us from giving an integral witness to the faith as part of civil society, both publicly and privately. A shameful Catholic will always be a crippled citizen.

4.- To return the dignity to the life of each person, to emerge from our crisis of violence and corruption, is evident to the reason of believers and non-believers. However, to face the culture of discarding is the renounceable responsibility of every Catholic, according to the gifts and charismas that God has given us to act wherever he puts us, sow or send. There is no small service, no more important Catholics than others. Do we not witness the testimony of a child who turned his wheelchair into a vehicle of all-terrain evangelization?

5.- dismantling the culture of discarding is impossible from an attitude of shameful Catholics and here the testimony of the pope shows his great strength. Let's be clear, Francis is not a Martian with science fiction powers. He is only a Catholic, among many, capable of articulating a message through contemplative silence, testimony and reason because he establishes his joy and hope in Christ. This is the underlying reason why your message is credible, reasonable, and challenging, universal.

John Paul II reconciled us with the joy of faith. Benedict XVI with the intelligence of faith, charity, and hope. Now, Francis calls every Catholic to be a beacon of joy and intelligence in mercy, to build a culture of encounter and dialogue, full of humanity.