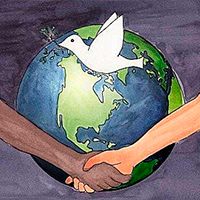 The violence produced by the religions was continuous news during 2015. The annual balance of massacres produced in God's name was higher than in previous years. Can religions bring peace?

1. A year of attacks in the name of God. Unfortunately, the list these attacks during 2015 is long: Charlie Ebdo and the attacks in Paris; decapitations, kidnappings, and invasions of entire peoples by the Islamic State; the persecution of Christians in Pakistan, Syria, and Iraq; the Boko Haram attacks in Nigeria, including the attack on the city of Kimba, on the recent Christmas.

2. A hard paradox. The extremist groups that kill in the name of God seek to impose faith in God, and with that premise, they kill those who do not confess their religion. But these violent actions all they can do is to keep people away from religions.

But that's not the only paradox. Violence against the innocent always carries a question about God Himself: If God is good, why does he allow people to suffer? Does God care about the victims of violence?

Pope Francis in his homily at the beginning of the year explained that the message of Christmas "always contrasts with the dramatic historical experience" because every day "we find opposite, negative signs that make us believe that (God) is absent". The closeness of God "seems to crumble in the multitude of forms of injustice and violence that hurt humanity every day".

3. A logic that transcends human logic. The hardness of the consequences of violence perpetrated in the name of religion is undeniable: suffering, banishment, torture, and death. In the face of this patent reality of pain, there seems to be no rational argument for explaining why evil does not have the last word about men and their destinies.

But the answer to evil cannot be just theoretical, merely "logical". The problem lies in the depths of human beings and their existence, where there is a different "logic" that encompasses reason, freedom, affection, actions, and destiny itself. The problem as it is in the religious dimension of each person, and therefore requires a supernatural response.

4. Christian "Logic". The Holy Father also explained that the historical fact of the birth of Christ, which assumes that God has become human, pushes us to cooperate with God in the construction of a more just and fraternal world, in which all people and all creatures can live in peace.

In other words, the Christian faith not only explains the origin of evil (as human opposition to God's wise moral mandates) but preaches that true love pushes us to seek actions that bring peace.

Therefore, in the words of the pontiff, "where the reason of the philosophers and the agreements of politics cannot come, there comes the force of faith that carries the grace of the Gospel of Christ, and that it is always able to open new paths to reason and agreements".

The religious logic to seek peace is the balance of contemplation of divine truths (which speak of loving God and neighbor) and action to seek peace directly (academic and political dialogue, journalism denouncement, care for the sick, displaced and wounded, international justice and persecution of war criminals, etc.). So, for peace to come, we need to learn to live the "logic" of faith with works.