Featured
articles
The church is not in the world to condemn
"I hope the book will make your heart discover," says journalist Andrea Tornielli, after interviewing the pope for the book “The name of God is Mercy”. 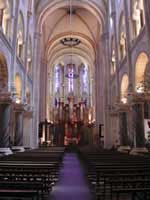