Featured
articles
Opinion and judgment are not the same; let's not judge!
Let's not assume the role of the judge. 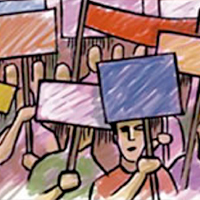 We are reminded: we should not judge others, especially if we judge without knowing motives, mitigations and without examining whether we are being objective. The common precipitation to condemn others without reflecting the case, does much harm, to them and the spontaneous judge himself. Equally to those who repeat judgments that they heard or read without the record of anything.

But we can say: what should I think, do or say when I know someone does something wrong? If the "evidence" tells me that a foul has been committed, a crime, a sin... can't I judge what I see? The answer is: No, we have no right!

We can indeed know wrong acts that seem committed by a person, how can we then close our minds not to think about it, not to judge? We cannot avoid thinking about an act, but it is possible to limit ourselves because we must distinguish between opinion and judgment. The first thing is part of a process, which we must stop before judging.

Let's not assume the role of the judge. The judge reviews a case, the accusations, the evidence of charge and discharge and with his knowledge and experience (which he must have), concludes, and dictates sentence. That sentence is absolution or condemnation. If it is reprehensible, because it is convinced that the law was violated, it exerts the power received to condemn and thereby to impose a penalty. But, something else, the judge is not the executioner.

What the judge does, as a result of his analysis of causes, is what we cannot do: condemn and penalize. This is the difference between opinion and judging. Many times we accuse and at the same time condemn someone for an undue fact that seems to have committed; But do we have all the elements to say, and to judge?

The cases in which innocents are accused and judged for fouls that they did not commit are too frequent. The most serious thing is that when we judge someone, we are not only left with judgment and condemnation but as soon as we can shout it out to the four winds: let everyone know. May the world designate him, humble him, condemn him, turn his back on him; And then, on many occasions, it turns out he's innocent or not so guilty, and it's too late to rectify.

The problem of judging, not to make an opinion, is that once we point to the culprit and it turns out that it is not, then pride prevents us from rectifying. After the cry of guilty! We were quiet.

When we judge and dictate our judgment, we forget the case of the adulterous woman of the Gospel: "Whoever is free from sin to throw the first stone". The problem is that the pride of being a judge of the act of others prevents us from recognizing, before others, our mistake, even we refuse to consider the possibility of being mistaken.

The trials and penalties have led people to commit crimes to "punish" the culprit. The mob is urged to attack, stone and even burn and kill alleged perpetrators: "justice" by own hand. So grave sin and injustice committed by those who make the judgment and condemn as those who assume them and participate as executioners in the execution of the sentence. A rabble was urged to cry out to crucify a righteous and free a criminal, and so Pilate, washing his hands, sent Jesus to die on Calvary.

I insist, between opinion and judging there is, though it may not seem, a great distance. Life is full of hasty trials, accusations that pass from word of mouth or are published "so that everyone knows". It's gossip, backbiting, defamation, slander. The most noticeable thing is precisely the precipitation, which does not give time to know more about the case. The accusation, the trial, and the conviction are done in one act.

This cannot be done; What's more, a professional judge does not; It takes time, but the social judges feel God: they do not have to think anything, there is "the test", and without thinking they accuse to anyone who wants to listen or read to them, their judgment. What about sentencing and punishment? As executioners, denigrate "the culprit" or guilty, let everyone know! And so the voices run, and even accuses and points to someone in hearsay because it is known "good source" that is guilty.

First of all, a general principle of law is the presumption of innocence, and secondly, that the alleged responsible has the right to defend himself, to give his version and present what is called evidence of discharge, in his favor.

Thus, when it seems obvious to us that someone has acted wrong, the first thing to do is not to precipitate conclusions; we must know more, and it is still possible that the truth of the facts we never get to know. So instead of throwing sentences, sentences on the air, keep our opinions and do not turn them into public accusations or we name ourselves executioners. Many good honors and fame have been sullied, and then there is no turning back, the damage done is not repaired. And it does not help to say "it's that I thought ... I believed ..."

We do not become judges, we are not. And remember that as we judge, we are also judged. The offering of Jesus: do not judge and you will not be judged, so wonderful, must be accepted. Let us avoid judging, even if something seems wrong, we do not commit that sin.