Featured
articles
Is it a sin to attend striptease shows?
Much of the world's problems are due precisely to the utilitarian conception of life. 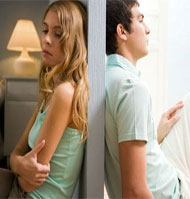