Featured
articles
"Fitness", a good discipline or an obsession for my body?
When someone is in good physical shape, with good functional and metabolic health, then we say it has good fitness 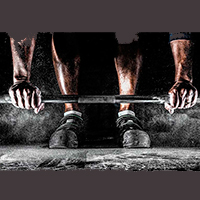 The word fitness comes from English and is a very popular concept used today that refers to two things related to each other. It refers to a physical activity that is planned and aims to improve the physical form to maintain health. On the other, it is used as something that people can possess or a state that can be reached. When someone is in good physical shape, with good functional and metabolic health, then we say it has good fitness. Both definitions are accepted and for many people, they are ideal to achieve. They spend hours, money and effort to achieve the objectives it proposes to look good and feel good. This can be translated, in men as having the most marked muscles; And girls like to look slimmer and stylized.

In essence, fitness is not bad, on the contrary, it is very good to do sport as an ascetic practice in which we discipline the body to train the will. We are therefore doing well to worry about our body. The problem is that not always the motivation is to give glory to God as Saint Paul says. Motivations can be distorted to the extent that the world's priorities are being strained. Both for men and women, muscles, counting calories, carvings, scales, tight clothing and vitamins, they are becoming almost a cult. If this is happening to you, or are you close to someone who lives for the sport it is good that you accompany it can lose the north and have consequences that do not affect only the physical but also the spiritual.

Pope Francis speaking to Italian sportsmen at the Vatican recalled that: “The Bible teaches us that the human person is a whole one, spirit and body.  … I encourage you to always cultivate, together with the sporting activity, also competitive, the religious and spiritual dimension”. But what happens when those values do not appear? how do we accompany someone who has lost the north and only cares about his physical appearance?

We want to present a list of real situations that can come to experience those who are regulars to fitness and who seek to modify their body composition and appearance through exercise forgetting the rest, to accompany and Especially to help them, keeping their lifestyle healthy, can reorient it to where God intended.

God has assigned a role to males and their masculinity is lived in fullness, not by muscular development and the physical ability to do things, but by how that role is lived. We have been entrusted with the care of the weakest, the role of head of the home, of loving father and concerned. We have been put to great saints as an example and to Jesus himself as a model of masculinity and strength, but we are asked for delicacy with the weak at the same time. Nowhere does it appear that to live that masculinity, a large muscular mass must be possessed.

2. Long time spent on the pretext of health care

There is time for everything, a time for everything in the sun. The problem is when priorities get messed up. Physical health care is important, and we have to devote time to that. Studies say that at least three times a week we should do physical exercise. However, other things are also good to devote time, and daily, not only three times a week: God, family, intellectual and spiritual growth, rest, friends, work and a long etcetera. What sport helps us to develop the habit and the discipline to be able to give the necessary time to each thing, but that does not become an activity to which it is given time of disproportionate form.

St. Paul affirms with great certainty that the Christians "have no gaze in the visible things, but in the invisible: what is seen is transitory, what is not seen is eternal" (2 Corinthians 4, 18). And it is not a mediocre foundation for those in bad physical condition, but it means looking at physical exercise not because of what it produces outside, but because it helps to the integral care of the person because it develops aspects that God wants them to be Developed, but to be able to achieve these invisible things, not to have more burly arms or a wider back! If someone does exercise and the only result, they get is kilos of less and more muscles, then it has served nothing.

Why be strong? (except for professional athletes or people who need strength as a security requirement for their work) if you ask those who train to be very strong the reason why they do, you will discover how their arguments are empty and with Little reflection in between. Being strong and not being able to carry on your life is meaningless. Being strong and not giving it a use helping others makes that force lose value. But even more, physical strength can be important in sorting out some domestic challenges like running a couch, but spiritual strength is important to all life's challenges. How to train that spiritual strength?

5. See my body as a seduction tool

There's nothing wrong with wanting to be nice to others. This applies especially for those single or single Who are in love and want to draw the attention of those who pretend. But doing it based solely on appearance has a great risk: what else can I offer besides seeing me well? Putting all the effort into the look leaves God on the bench and does not allow him to play. He has put amazing things in each and those things are a big part of our appeal. On the other hand, the seduction itself is not very holy, because it involves associating the person of his body, has to foment the disordered desires and stimulates the sexuality beyond its natural order.

We have different roles, not because there is a social distinction between the male and female genres, but because we are inherently different, and God has wanted it that way. "And God created the human being in his image; He created it in the image of God. Man and woman created them” (Genesis 1, 27). Behaving like a male, being a male and relating to others as a male must be how man lives the identity that God has given him. To be a woman in fullness and to live femininity with delicacy without pretending to occupy the place of the male, to have the strength of a male or the physical performance of a male, will cause that woman to discover the value that she has in herself and not wanting to be like others.

7. Falling into vanity and excessive care of the appearance

It is not a small thing to be vain, indeed it is the same sin of the devil and by which he was expelled from heaven. I am not saying that those who fall into vanity are diabolical, but the tendency is that they end up feeling the same as he felt at the beginning of time: Your heart was filled with arrogance because of your beauty; You corrupted your wisdom because of your splendor» (Ezekiel 28, 17).

Looking to look good there is nothing wrong, because it speaks of self-esteem, that we must have to love our neighbor as ourselves, but that the whole life revolves around the physical aspect, which is certainly a kind of idolatry and puts the body and its appearance in the Place that belongs to God.

"By being made in the image of God, the human being has the dignity of a person; It is not only something but someone” (Catechism 357).  This tells us that we should not look at ourselves as an object to be improved but a person to care for. It is healthy to worry about what one eats, especially for health issues and to keep metabolic rates in healthy parameters. It is also healthy to take care of the diet to maintain adequate weight, not only for the appearance and self-esteem (which are certainly important) but for the health risks and quality of life. Feeling guilt and remorse for eating a dessert, a treat or a snack can become a moral distortion that affects not only the lives of those who do not eat it. Be careful, be aware of what you eat, but don't be a slave to that.

"Each one examines his conduct, and thus he may find in himself and not in others a cause for satisfaction" (Galatians 6, 4).

Do not compare, if you have to compete against someone to overcome it that is against yourself and if you are looking for a model to resemble, that is Jesus. Finding motivation in wanting to be or seeing yourself as another person is not healthy, you do not need to be a copycat when you can be the original version.

10. Overcome laziness and bring it to spiritual life

The physical training and effort involved have a major impact on the training of our will and therefore on our way to holiness. Those who are accustomed to striving and not leaving things half-heartedly can do so in other aspects of their lives. Training your body helps so that your soul knows how to discipline and not that your body is one of the orders.

"He who ascends never ends up and goes step by step; the end of what is always susceptible to perfection is never reached. The desire of the ascender never stops in what is already known to him (St. Gregory of Nice).