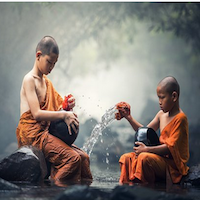 Two children made a deep cut in one leg. There was an infection, and they both died. The first lived in a modern city and a family with normal income. The second lived in an isolated indigenous village.

In some countries, the first death could be the cause of a legal process, if it is discovered that the parents did not come to the doctor or using the normal methods of disinfection.

The second death would be "judged" according to the rules of the tribe, and perhaps there would be no more consequences. That son would have died because it is normal for one to die in the village because of such wounds.

Why do many assume that parents in the first case had a serious obligation to try to cure the child, whereas in the second case there would be no guilt if modern methods were not sought?

It will be replied that if there are curative means and are known and affordable, there would be an obligation to resort to them, whereas in the indigenous village there would be no circumstances that create such obligation.

But some might ask: Why in a world as communicated as ours there are still populations isolated from all progress, even with laws that prevent their inhabitants access to information and modern medicine?

The answer is not easy. Some argue that it would be better to leave certain tribes in isolation, for example in areas of the Amazon rainforest, and criticize anyone who tries to alter the lifestyle of those people to "impose" or simply "propose" objects and knowledge " Western “.

However, this stance is debatable, because it would be linked to the budget according to which to offer technical progress, such as those achieved by modern medicine, would harm a human group, when in fact it would improve the standard of living of people and avoid Deaths like that of the wounded child in the village.

Therefore, in a world where knowledge is well applied allows access to important improvements to the health and coexistence of people, to raise certain isolationist walls that prevent some peoples from having the opportunity to use such improvements is not only problematic, But it encloses a serious dose of injustice.

Certainly, those who seek to impose on others a change of life against acceptable convictions and based on the search for true good are not only problematic but unfair.

But without impositions that threaten the correct ideas of an isolated people, it is possible to demolish isolationist walls and to promote bridges that leave spaces, at least, to know not only techniques that help to save lives, but the knowledge that allows a healthy self-criticism About the rules adopted by each culture.