Featured
articles
The universe in and out of us
Otherworldly Stories. 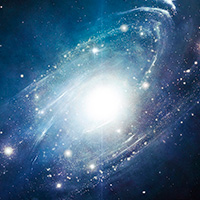 As children we get used to hearing stories that explain the origin of things inside and outside of us. When we become adults, we learn to count them, too. And we retain the pleasure of learning new ones. As astronomers we have the task of telling humanity a story: that of the universe. A universe that is fourteen billion years old!

Since its origins, human beings have felt the need to seek a rational explanation that allows them to understand the deeper meaning of the cosmos around them. We usually think of the universe outside of us. But we forget that the matter of things in our everyday world and our own bodies is produced by the core of the stars.

In the "Hymn to Matter" Teilhard de Chardin sang it as "triple abyss of stars, atoms and generations, you who, through and dissolving our narrow measures, reveal to us the dimension of God". Behold, the knowledge of the universe widens our hearts.

Three institutions have decided to recount their contribution to this itinerary of knowledge of the subject: The National Institute of Nuclear Physics (INFN), the physics department of the University of Pisa and the "Vatican Specola" (astronomical observatory. While the latter deals with theoretical and observational astronomy, the INFN and the physics department deal with those subjects that are indispensable for unifying the knowledge of the cosmos. Indeed, if telescopes allow us to know the infinitely large, particle accelerators help us to know the infinitely small. Which, moreover, is the seed from which the infinitely great flourished. Already this unique approach between "big" and "small" should stir up our wonder!

The story of the universe could not be told without our "little" human stories. At this crossroads of cosmic history and human history, Pisa is a privileged place. It was the cradle of Galileo Galilei and also the city where, from 1903 to 1931, Archbishop Pietro Maffi developed his pastoral ministry, since 1907 Cardinal of Santa Romana Church.

Maffi was a passionate communicator of astronomy. It was unanimously the esteem I gained in the scientific environment. So much so that, in 1904, Pius X appointed him president of the Vatican Specola with the task of reorganizing it and finding a new director (later elected in the person of the Jesuit Johann G. Hagen) at a delicate moment in the institution's history. Maffi lived his dual membership, in the world of the Church and that of science, as an occasion to promote dialogue and collaboration between these two areas of human experience, though not only as conflicting, but as co-active in the search for the most meaningful deep in human existence.

The exhibition "History of the Other World: The Universe in and Out of Us", which will take place in Pisa next spring, deals with the nature of the elements that make up the universe and also of living beings. It moves from the immaterial photon that brings light to the particles found at the origin of the mass, such as the Higgs boson. This cosmic journey deep in matter continues in the solar system, the stars of the Milky Way, to the distant galaxies.

However, let us not forget that in our cosmic adventure there are still unresolved questions, to which science seeks to respond. For example, what is dark matter and dark energy? It is worth remembering that, according to our most up-to-date knowledge of the universe, it is composed of only 4% of "normal" matter, that is, made of atoms, while 23% is made up of dark matter and 73% of dark energy.

The exhibition, while open to the general public, is aimed primarily at young people. Speaking to students during the September 2010 pastoral visit to the United Kingdom, Benedict XVI said: "There is always a bigger picture in your Catholic schools, above and beyond the individual subjects of your study and the various capabilities that you acquire... But always remember that every subject you studied is included in a broader horizon." An invitation that sounds familiar to all astronomers. They work and study animated by the awareness that their task is to open ever wider horizons to humanity.