Featured
articles
Prays for the rain
Faith always adds something to science: openness and trust in God's action in our world. 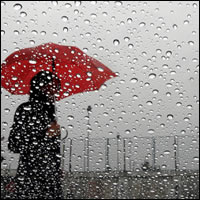 After several months of drought, the bishop asked for prayers for the rain. On Sunday, the parish priests invited the people to pray to God for the gift of water.

Two days before, the weather forecast heralded the arrival of abundant rains from Monday. And on Monday, on time, they started.

A critic observed these facts and published his impressions. Specifically, he said it was very easy to ask for the rain when it was already announced in the forecasts...

As this critic thought, praying for the rain on a Sunday when he knew he was going to arrive the next day, wouldn't it be a curious way to deceive people?

Because the Catholics, when they noticed on Monday the generous rain that alleviated the fields and the cities, could think falsely (according to the critic) that it rained thanks to his prayers.

If we look at the situation more thoroughly, both the critic and the believers know that the rain does not come because it says the weather Service (which is often wrong) but for other causes.

But the critic and the believers see those causes differently. For the critic, the rain comes by blind forces that no one (not even a divinity) can control.

Instead, believers look at the world, with all its complex laws, as something dear to God. A god who is good, who loves his children and who "brings out his sun on evil and good, and raining on righteous and unfair" (Mt 5.45).

Are these two incompatible visions? No, because science tries to explain nature with laws that describe phenomena, but without excluding the existence of a God who acts from the very physics and chemistry.

for his part, the faith does not renounce to know those laws, nor stops looking at the prognoses to decide if one leaves home with or without umbrellas. Simply add something to science: openness and trust in God's action in our world.

On Monday, the bells have touched rebato with joy: The rain has begun to alleviate a weakened territory after long months of damaging drought.

The believers give thanks to God, who again offers the gift of water to his children and to so many creatures (plants and animals) that share with us the wonderful adventure of earthly life...