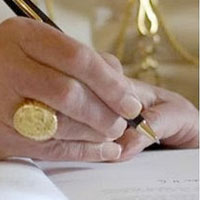 An encyclical is a solemn letter addressing the Pope to all the bishops and faithful of the Catholic orb to set out certain points of Christian doctrine around a particular matter. Therefore, its content is truly transcendental and perennial, the most important thing a pope writes. In the case of Benedict XVI, he bequeathed three of them to mankind, the first when he was not yet one year after he had become the pastor of the Church of Jesus Christ. As is traditional, they are all known for their Latin title.

The first encyclical was published by Benedict XVI on 25 January 2006. Deus Caritas est means "God is love". Unlike other pontiffs, he did not chart in this first encyclical, as is usually the tradition, the lines of what would be his pontificate. The document is about Christian love. The Pope teaches that:
The fundamental choice of life is to believe in God's love, for you do not begin to be a Christian but by the encounter with Jesus.
Love is "divine" because it comes from God and God unites us and makes us one thing.
There is an inseparable relationship between love of God and love of neighbor.
Eros is the name that the ancient Greeks gave to love between man and woman; This, placed like the man by his Creator, needs discipline, purification, and maturation so as not to degrade himself into pure "sex".
There are other Greek-language terms relating to love, such as philia (love of friendship) and agape, widely used the latter in New Testament writings.
Agape is free and selfless love, unconditional love.
God's Eros for man is both agapae, not only because it is given entirely free but also because it is love that forgives. In Jesus Christ, who is God's incarnate love, Eros agape reaches its most radical form.
Love (faces) will always be necessary, even in the fairest society.


Pope Ratzinger's second encyclical was released to the Church on 30 November 2007. It's called Spe Salvi, which means "Saved in hope." Benedict XVI here gives a masterful theological exposition of what Christian hope is and criticizes the idea of "faith in reason and progress" aimed at trying to recover the "lost paradise". Here are some of its main points:
Salvation is offered in the sense that we have been given a reliable hope through which we can face the present.
Those who have hope live differently; has been given a new life.
"Hope" is a central word of the biblical faith, to the point that in many passages the words "faith" and "hope" seem interchangeable.
To come to know God, to the true God, that is what it means to receive hope.
Christianity does not bring a socio-revolutionary message, Jesus did not bring a political liberation but the encounter with the Lord of all lords, the encounter with the living God and thus the encounter with a stronger hope than sufferings.
Those who do not know God, even if he has multiple hopes, are at heart without hope, without the great hope that sustains all life.

Finally, Caritas in Veritate is social and was delivered to the world by the German pontiff on 29 June 2009. The translation of the name of this encyclical is "Charity in truth", and presents how charity and truth must be integrated into the integral development of the human being. It also explains that, rather than a change in the economic system, a change of mindset is needed for people acting in the economy; therefore points towards the recovery of "the traditional principles of social ethics", such as transparency, honesty, and responsibility" but also in giving space for freeness and solidarity. Here are some of his fundamental teachings:
Charity is the greatest gift God has given to men. It is the master path of the church's social doctrine.
The origin of charity is the father's love for the Son, in the Holy Spirit.
Men are recipients of God's love, and at the same time called to spread God's charity.
Justice is the first way of charity. On the one hand, charity demands justice; on the other, charity overcomes justice and completes it by following the logic of surrender and forgiveness.
True charity always manifests God's love.
Commitment to the common good, when inspired by charity, has a value superior to secular and political commitment.
Fidelity to truth is the only guarantee of freedom and the possibility of integral human development.
Openness to life is at the heart of true development.

It was speculated that if Benedict XVI had written encyclicals on hope and love, he would surely write another about the other theological virtue, the faith; more so having called a Year of Faith. The Vatican confirmed that the Pope was preparing this encyclical "as a gift for the Year of Faith". Unless in these few days left as a pontificate, the publication, which has certainly not been announced, was made, the fourth encyclical will not see the light. If it were later published, it will probably have to be considered differently from that of a papal document.